At even strength, Pearson’s game coming along 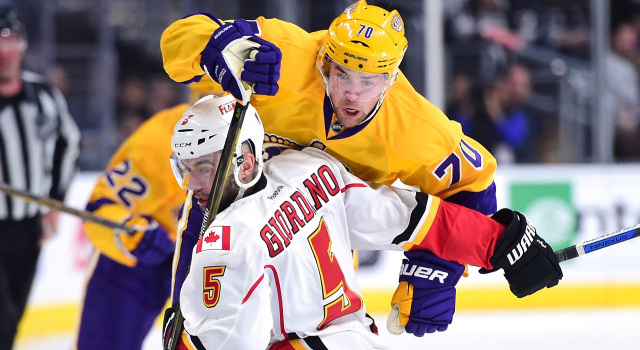 Tanner Pearson did not play in the first two games of the Kings’ two-week road trip through the Atlantic and Metropolitan Divisions last month. He was, at the time, enduring a reduction in his ice time, and as Darryl Sutter said on February 8, “having a hard time keeping up.”

Now contrast that with his performance against the Washington Capitals on Thursday night in which the 23-year-old was continually in on the forecheck and playing with a lot of energy and jam in prolonging offensive zone time and finding pucks and space for his linemates. He finished with two assists in a plus-one performance.

“I think every game you have to look at it like you can improve on [something], but some of the good stuff was there for sure, so you’ve got to look at that and build off that and correct the other things,” he said.

That inward look at his own game prior to the Kings’ road trip focused on his compete level and better protection of the puck. When he was re-inserted into the lineup four weeks ago, he buried an overtime game-winner in a 5-4 win over the Rangers at Madison Square Garden before punctuating the trip with another overtime dagger against the Predators. But those were his only two points of the trip, and none came during five-on-five play. Since returning home for this Staples Center-heavy portion of the schedule, his even strength play has taken a step forward.

“Five-on-five he’s given us a more solid game, and obviously he’s scored, probably in our last 10 games, he’s probably got, what, six or seven?” Darryl Sutter asked. (It’s six in the last 13, as well as eight points in the last nine.) “We need that. We need him to get his game back up, and with Tanner, he’s got to work from small parts of the game first, and then he has success the other way. When he stops working in the hard areas, then it looks like he’s not involved. Hey, he had to sit out a game because of that.”

During five-on-five play since he was reinserted into the lineup against New York, has’ posted a 58.1% Corsi-for rating, with a +2.9% rating relative to his teammates. Overall, his 1.6 points per 60 minutes in five-on-five play ranks sixth on the team and represents a rate of production at even strength that has served as a boon during a period in which the team is without the services of Marian Gaborik.

“Just punching the reset button once I got healthy, looking at my game and what I needed to improve on [has been beneficial],” Pearson said. “As the confidence goes up the other stuff comes with it, and I think when you focus on the little things, the other things come with it too.”

Tanner Pearson, on pressing the reset button:
I think just looking at everything, one bad play leads to another, board battles, loose-puck battles, all that kind of stuff. You focus on the little picture and it will help out with the big picture at the end of the day, so that’s what we did and it’s been going good so far.

Pearson, on “fine-tuning” aspects of his game:
It’s probably a bit more than fine-tuning this time around, maybe if I had looked at it earlier in the season it would have been fine-tuning, but a little clump of stuff turned into a big, so I pushed the whole reset button and it’s been working so far.

Pearson, on whether playing 82 games is a particular challenge, given his injury history:
Yeah I think so, it’s the first, however long I’ve played 82 games, you look at last year I was hurt, the year before I was up and down the whole year other than the second half. It’s been a while since I played a full season, knock on wood, but I think it’s kind of, not necessarily new, but it’s something to get used to. [Reporter: Especially mentally.] Yeah, like in junior, it was 68 or whatever, and I think Manch is close to 70 or 70-something, so yeah if you look at it it’s only 10 more games, but it’s still a difference.