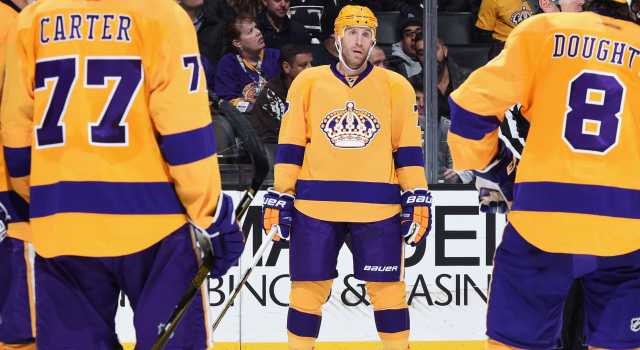 Jeff Carter hit a milestone in the last Kings game, and if the stars align tonight, a milestone could also be reached when the Kings face the Washington Capitals tonight at Staples Center in the teams’ final regular season meeting (7:30 p.m. / FOX Sports West / KABC 790 / I Heart Radio).

The veteran defenseman, who has two assists in five games since rejoining the Kings, is two assists shy of 100 in his career. Could he pick up a couple helpers tonight?

“Well, I wouldn’t hold your breath, but you never know,” said Scuderi, who last turned in a two-assist performance on January 9, 2010.

Consistent offensive production hasn’t ever been a part of his contribution. Going unnoticed has been, however, and those games where one might pause, look up and wonder what Scuderi may or may not have contributed are usually games in which the 37-year-old silently adhered to his role.

There may be limitations in his play, and he’s not going to be a player counted upon to drive play into the attacking end – he’s had a negative CF%Rel every season in his career, and his CF%Rel in his five games with the Kings is -13.2% – but Los Angeles, with Scuderi, will still remain the top possession team in the National Hockey League despite the proclivity towards defending when he has been on the ice.

“He’s a veteran on a young defense, so he’s supposed to bring some stability and composure and balance. He does that very well wherever he’s been. That’s why he’s a two-time Stanley Cup champion.”

That balance could be allowing Brayden McNabb’s game to stabilize, even if the 25-year defender still experiences the occasional hiccups that often become a part of a young defender’s game. But McNabb has only been on the ice for one goal against in five-on-five play in the five games since Scuderi rejoined the team. His arrival, which pushed McNabb down the depth chart, still appears to benefit the defense’s ability to drive play. In his 59-games pre-Scuderi, McNabb’s CF%Rel was +1.9%; in the five games since, it’s +9.0%. Take the small sample size for what you will.

As for his own play, Scuderi says he’s “feeling good” with his play and is “pretty close to where I want to be.”

“I think having a familiarity with the system and socially with the guys helps you fit in a lot faster,” he said. “There’s still a couple of things, you’ll feel like you’re a total fit when everything you do is instinct and you’re not thinking about it. Right now I’m still thinking about where I need to be in terms of our system here as opposed to what I was doing in Chicago or Pittsburgh, and when that becomes instinct I don’t know, I’m totally over, but I feel pretty good right now, it’s definitely getting more comfortable.”

Rob Scuderi, on differences in the team’s systems between now and three years ago:
There’s a couple of small differences, small wrinkles that I think are a little different, not a lot, but you still have to work on them. You want your transition to be seamless, and you’re trying to do it in a compact amount of time given where we are in the season, so you want to make sure you get the details correct.

Scuderi, on the Capitals:
Yeah, they’ve been a dynamic team this year, they seem a more complete team now. Instead of getting some big time goals like they have from some of their stars, they’re just a more well-rounded, grittier team, and I think that’s made them much harder to compete against.

Scuderi, on Justin Williams finding a good spot on Washington’s roster:
I think he’s going to find a spot anywhere, he’s always been a big-game player and a guy who’s been consistent throughout his career, so I don’t think it’s a shock to me that he’s doing well in Washington or anywhere else he might have landed.

Scuderi, on whether it’s tougher for a forward to change teams mid-season:
I’m not sure, sometimes I think defense because when you make a mistake on defense it’s either in your net or it’s a grade-A scoring opportunity, and I think when you’re messing up a small detail on defense, that could be the difference in the game. Whereas if you make a mistake as a forward – not that you want to, but you still have maybe two defensemen and a goaltender back to kind of give you – there’s some layers for help, whereas if you make a mistake as a defenseman, you may have one other D and the goalie, sometimes your chances aren’t so good. But, I don’t think it’s necessarily easy either way.