Williams up for ‘trip down memory lane’ 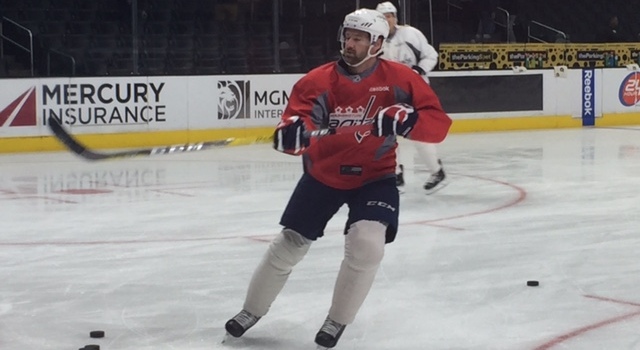 That was Justin Williams’ comical remark to open up his media session today, his first at Staples Center as a member of the Washington Capitals, as if to ask why would anyone want to talk to him.

The 34-year-old Williams of course won two Stanley Cups with the Kings in 2012 and 2014 along with new Capital and former King Mike Richards. Tonight will be his first game in Los Angeles since April 11 of last season against San Jose — a dismal ending where the Kings missed the playoffs. Now Williams, nicknamed Mr. Game 7, comes in with the NHL’s best team by far, a Capitals team that’s historically underperformed in the playoffs but leads the league with 102 points.

Head coach Barry Trotz called the 2014 Conn Smythe Trophy winner a “guy’s guy,” a player about the journey and not just the trophy (though he has three Stanley Cups).

Williams, on what it’s like being back at Staples Center:
Walking here is kind of a trip down memory lane a little bit, seeing pictures of championship teams and stuff, seeing your face there. So it’s obviously, I don’t know the word, weird. But I’m obviously trying to move forward now. I’ve done that this year and we have a great team here and I want to start making new memories.

Williams, on his thoughts of a possible tribute tonight:
I’ve thought about it. Haven’t really put it into words or anything. We’ll see what happens out there. I don’t know.

Williams, on being on a Capitals team that has had trouble winning Game 7s:
I don’t really think it has to do with Game 7s it has to do with playoff success and this team has had some but they haven’t had enough by their standards and by how talented the team is. A few new faces this year but this is a new team and I feel as though all the players that have been here a little while have a different feeling about this year. We’ve showed throughout the year that we’re going to try not to be denied.

Williams, on playing against tough teams like Anaheim and Los Angeles:
I think we can win games a lot of ways and I think that’s one of our attributes that no matter if it’s 1-0, if it’s 6-5, we feel we can win any game we play. LA obviously plays a hard game, a go to the net you’ve got to earn everything you get and that’s fine with us. We’re coming into California looking for some good, quality, exciting playoff-type games and that’s what we got in Anaheim and that’s what I expect the rest of the way.

Williams, on playing tougher teams like Chicago, Anaheim and that helping keep focus with their big lead in the standings:
Absolutely. Absolutely it does. Throughout the year you play teams and you try to send messages throughout the season. You don’t want to give any team any inkling that they can beat you, feel like you have a leg up on them so you don’t want to give anything away. Obviously teams in the Western Conference are very powerful and could very well represent the West but they’re just fun games to play. Exciting, emotional, and I feel I’m a lot better when I play those games.

Williams, on seeing old friends on this trip:
Yeah. Sure, I have. I have seen quite a few. We’ve been here quite a while, it’s been a nice trip so far but the reason we’re here is for tonight so I’m excited for it.

Williams, on winning tight games recently with the playoffs looming:
Every game is different. Every game has its own storyline. We’re playing some great teams, we’re getting to the crunch time of the season where a lot of teams are trying to make playoffs, trying to squeeze in, trying to improve their playoff positioning. So, they’re fun games and we’re emotionally invested in them. I liked the way we played in Anaheim.

Washington coach Barry Trotz, on Williams’
With Justin, he’s a guy’s guy. He’s a hockey player. He fits in so well in so many areas. He understands what’s going on. He’s got a good sense of your emotional level, he’s got great timing in what he says because he’s had some great experiences. He’s not always talking and saying stuff so his voice is always heard or anything like that. He says the right thing at the right time. I think when we need a jump, he’s a guy who can get us going. You’re on the bench as a coach and your maybe team isn’t playing as well there’s always the guy that can just sort of in his own way get things rolling in the right area, and say the right things, that’s to me what he’s really done. And then performance-wise he’s been exceptional this year. [Reporter: Seems to love talking about playoffs and Game 7s]. I think he gets excited about all that stuff. He’s excited about the challenge. He knows how hard it is to win. I think that’s what internally, I don’t know, but just as an outsider and trying to figure out Justin a little bit, I think he’s a guy who recognizes how hard … it may not be about the trophy, I think he recognizes the importance of the journey. The journey is the memories, the bonding, those games, all those things last a long time and in the end you get a trophy. But I think it’s more important in the journey for him. … That’s why I think he enjoys it so much.

Trotz, on Drew Doughty and his contention for the Norris Trophy:
You forget how good Drew Doughty is. I think he’s got to get some Norris Trophy votes this year. I think he’s been the best defenseman this year in my opinion. Now that we’ve seen them more, scouted them a little bit more … just how good he is. And then obviously have a chance to work with him in Team Canada, so pretty excited about that.

Trotz, on what he liked in Capitals’ game in win vs. Kings last month:
I thought we were pretty good on our breakouts. I thought we played with real good pace. I didn’t like our start, again. But I did like the way we sort of worked our way into the interior.

Trotz, on if anything surprised him in last game vs. LA:
No, they have an identity. They play to their identity. They’re a big, heavy team. There’s not a lot of fluff to their game. They’re pretty straight forward. They play a hard, blue-collar game with some white-collar skill in high-end guys like Kopitar and Doughty.

Trotz, on what he’s doing with his team to keep them fresh with big lead in standings:
We’ve got a couple things. I want to keep it internally what we’re doing. But for the most part I think the guys realize we are picking an area of our game. We’re doing certain things on the bench that maybe are a little different than what we did in the regular season that will probably be more relevant in the playoffs versus maybe the regular season. There’s a couple things yeah but I want to keep most of that internally if I can.