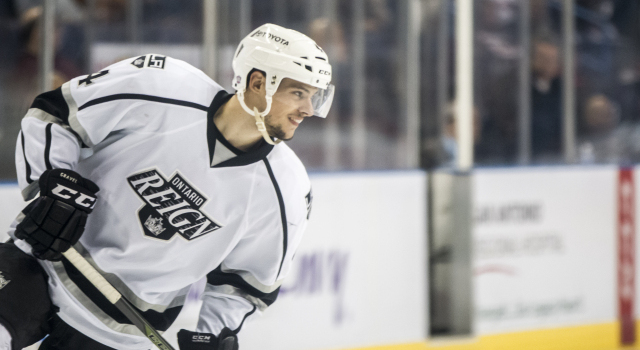 At least when it comes to one topic of discussion.

“My girlfriend’s on me about getting a dog and I’ve been holding it off for forever,” said Mersch. “And it’s for good reason. We don’t have any pets, nothing, so it makes the moves easy.”

Those moves are ones he and roommate Kevin Gravel has made up to the Kings. No pup, no problem, no pet left alone when both of the Reign players were recently serving February call-ups.

For Mersch it was his third recall this season and for the defenseman Gravel it was his first, making his NHL debut on Feb. 11 against the New York Islanders. Gravel got the word while the Reign were in San Jose and Mersch joined him just over a week later in Nashville, Tenn.

“It was fun. We’re roommates here so we had fun with it,” Mersch said. “We had been sitting in San Jose in our hotel room and then he got called up and then a few weeks, whatever it was, I got called up. We just kind of went from there. From going to San Jose we laughed about it and then being in the NHL and Nashville together, it was a pretty cool experience. I’m just so happy for him.”

In unfamiliar territory, familiar faces are important. From Ontario to Nashville to El Segundo, from top dogs to healthy-scratched youngsters staying for extra work at morning skates, it’s quite the transition. For a moment in late February, they were on the ride together.

“Mike and I are very close. He’s one of my best friends,” Gravel said. “For him to be up there with me was kind of a cool experience. We were both roommates down here and our apartment’s empty down here and then we’re roommates on the road up there. We’re together a lot and to have a familiar face up there with you is comforting.

“We’re kind of in the same position, obviously both very new up there and kind of starting on the bottom, working your way up again which is how it should be. We both just went day by day, tried to put our work in and just tried to interact and get to know the guys as much as we could. To have Merschy there was helpful for me, for sure.”

Last Sunday’s game against San Antonio, a commanding 5-1 victory for Ontario, was the duo’s first back since returning to the AHL affiliate. The 23-year-old Mersch reached the 20-goal plateau on a rebound goal in the second period and got usual first-line minutes with center Nic Dowd and right wing Sean Backman. Gravel, who actually turned 24 on Sunday, slotted back in along the blue line with partner Derek Forbort.

“It’s always great to have those two in the lineup,” Reign head coach Mike Stothers said via text after the game. “They bring so much to the team on, and off, the ice. Both very reliable and dependable. They help our penalty killing immensely. As a coach you just know what you are going to get from these guys every shift. They raise the level of their teammates as well.”

That’s the path prospects like Mersch and Gravel aspire to take after getting just a taste of the next level.

“It’s just a process,” said Mersch, who got into two Kings games in his recent call-up and 17 total this season. “Got to keep working hard, get more comfortable every time. Just got to play desperate and like I want to be there and be in the lineup every night. Just got to stay with it.”

Mersch used the word “process” a handful of times when trying to describe what it’s like to go up and down from the NHL and AHL. One word he didn’t use was progress, although he hinted at it.

“Personally I thought the games slowed down a little bit compared to last time my first time out,” he said.

After Mersch made his NHL debut on Dec. 11 against Pittsburgh, he returned to Ontario a month later with the homework to strengthen his speed transitioning up ice. Gravel sees his assignment vary by his position.

“I worked a lot with (Kings assistant coach) Johnny Stevens and one of the things he really wanted me to work on is my hips in the corner and kind of closing guys off and ending plays,” Gravel said. “I agree with him completely. I think I can get better at my hip position and not letting guys cut back and gain the back of the net, whatever it may be.

“Just kind of being harder to play against in the corner and finishing plays and getting the puck to the forward and transitioning the puck the other way. That’s one of the things I’m going to try to work on down here.”

Gravel played in four games in his call-up, but none more important than a Feb. 16 match-up against Eastern Conference power Washington. But late in that game he got caught awkward position, coming over the top of Kings goalie Jonathan Quick and the Capitals took advantage, took the lead and went on to win.

It was a learning experience for Gravel.

“It’s a tough one to be out there for,” Gravel recalled. “Obviously you play that differently in your head. Everyone was pretty supportive. You win as a team, you lose as a team. Obviously I don’t want that to happen, especially that late in the game in a pretty big game for us there. I don’t know. It’s a tough one to be a part of but you kind of grow from it obviously. It stings but it makes you better, you learn from it.

Mistakes, as unfortunate as they may seem at times, are also part of the process. Experience is gained through mistakes and through experience comes confidence.

“I think I kind of proved to myself that I can play at that level,” Gravel said. “Obviously not everything goes smoothly, there’s ups and downs and I experienced that in the four games that I got there. I think you just want to continue to grow and I felt that with each game I got a little bit more comfortable, kind of gained a little bit more confidence with the puck as each game went on and kind of got my feet wet and settled into there a little bit.

“The pace is definitely faster, guys are quicker. They do a great job of making you feel welcomed and just kind of take the pressure off and let you play your game. They just kind of stress just do what got you here, don’t be afraid to make a mistake, that kind of thing. All the guys were great. The players were very welcoming and made it kind of easy to, not so much relax, but kind of take the stress off a little bit and take a deep breath and just play your game.”

As of Tuesday, the Reign’s magic number to the playoffs was 18 points. They have 17 games left before they begin their Calder Cup defense, something Gravel and Mersch were a part of a season ago. The first-place team in the West hasn’t officially locked in a spot, but it’s a certainty.

From an organizational standpoint, it’s a much different year. The AHL team was based in Manchester a season ago and the Kings missed the postseason altogether. Now, both teams have their eyes on playoff hockey in SoCal. There’s a chase for three Stanley Cups and two Calder Cups in five seasons. Mersch will be an hour east of Staples Center with the potential to join NHL playoff hockey.

“That would be a new experience because last year obviously when we went through the playoffs the Kings weren’t playing so everything was kind of focused and dialed in out here,” Mersch said. “So it will be interesting to see how things go when there’s two teams that are really good fighting for cups.”

It’s been a memorable season for Gravel and Mersch, roommates getting their feet wet and realizing NHL dreams. But with their NHL time on pause, at least for now, there’s not much time to reflect, certainly no time for a dog, and only time to look forward.

“Playoffs is the best time of the year,” Gravel said. “I know we’re coming down the stretch here … we’ve got a lot we can improve on down here and hopefully come playoff time, one, we have a spot and two, we’re playing our best hockey when it comes around. I think a lot of us experienced that long run and the feeling of what it’s like to win the championship and I know we are all hungry for that again.”