Martinez on tonight; Lucic enjoys “everything” about L.A. 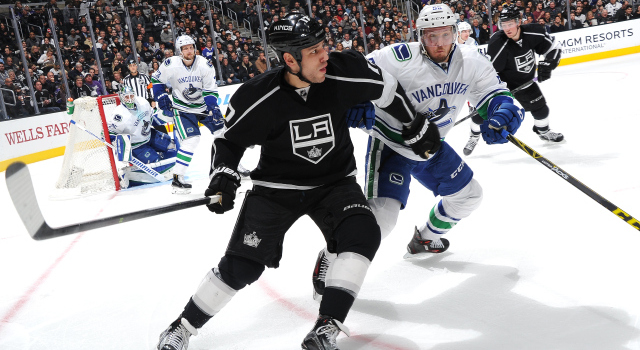 Even if “park and ride” isn’t explicitly stated, they’re well understood verbs characterizing the Kings’ thrust under Darryl Sutter and depict the day-to-day efforts of a team that has learned to move on quickly from game to game without dwelling on highs or lows. It’s again going to have to be put into practice on Monday as the Vancouver Canucks visit Staples Center for their final time this season, just two days after the Anaheim Ducks left downtown Los Angeles in sole possession of first place following an emotional, 3-2 win.

“I guess you can take the good things, learn from the bad and move on, but tonight’s game is just as important as that one is, it’s a division opponent,” Alec Martinez said. “This time of year, obviously things are really tight, it could come down to a game or two or an overtime, all of the points are really important so this is going to be a huge game for us.”

Earlier today, Martinez spoke about the segue from Saturday’s game to today’s game, while Lucic addressed his first 63 games as a King and reiterated his desire to remain in Los Angeles.

“I really enjoy everything about it, it’s a great place to play, a great place to live, a first-class organization with how they treat their players,” he said. “The teammates, the coaches, everything, it’s great people to be around, and that’s reasons why I would definitely love nothing more than to remain a King.”

Alec Martinez, on the Vancouver Canucks:
I guess they’ve had a lot of change throughout the past couple of years, you know obviously you have a fixture – the Sedins and a lot of their same guys, but they’re a fast-pace team, they’ve got a lot of skill, they work really hard, they have good goaltending and strong D, so it’s just like any other team in the league, you know, there’s not a whole lot of [difference] in the league anymore, anyone can win on any given night and it’s going to be a tough test for us. And like I said, it’s a division game, so it’s a big two points at a big time of the year.

Martinez, on the Kings’ forechecking and pressure from Saturday:
I think that’s something that we have to get better at, staying on teams over the course of a 60-minute game, and that’s a big part of LA Kings hockey – getting in on the forecheck and creating turnovers and creating disruption. Really as a five-man group, and personally as a D-man, the opportunity when the F3 is there is that we can step down and keep pucks alive. So I guess you can take the positive from that, but at the end of the day we still need to get two points regardless and we didn’t.

Martinez, on the team’s ability to move the puck quickly up the ice:
We can’t get in on the forecheck and establish that part of our game if we’re not quick down low. Darryl always stresses it, you know, often times opportunities at the other end start 200 feet away, and that’s a big part of our system as D-men, we’ve got to be moving the puck quick and shutting down plays and getting the puck into forwards hands so they can go to work. I think as a D-corps we can get a lot better at that and hopefully that will start tonight.

Milan Lucic, on his first year in Los Angeles:
Yeah it’s been great I’ve really enjoyed it so far throughout the season, the team’s played well looking at it from a full season perspective, we were up there in the standings at the top of the Pacific division for most of the season, and with Anaheim playing as well as they’ve had, they just passed us. I think there’s a lot to look forward to with 18 games left here to see where you’re going to end up in the standings; this is the best time of the year, the final stretch before it all starts, you work hard all season to put yourself into a position to play in the playoffs and we want to make sure that we don’t take anything for granted and make sure that our game is sharp and earn that playoff spot.

Lucic, on whether Saturday’s game against Anaheim reminded him of other rivalries:
Definitely, and some familiar faces from that Bruins-Canucks [rivalry], people that are on the Ducks now, so it kind of felt a little bit like that. They’re a really good team and they’re going to be hard to beat. I think we’re a really good team as well, we have a lot of great players and a lot of guys who’ve won – not just one cup, multiple cups in here – and I think that’s an exciting part as an individual coming to a team this year, and that’s why I said from the start, coming to a team, getting a chance to play with guys who are champions and have done and have been there before is something that is really exciting. Like I talked about, with it being kind of that final stretch now of the season before the playoffs, I think it gets even more exciting to get into that battle with the guys heading into the playoffs.

Lucic, on the biggest adjustments in joining Los Angeles from Boston:
The system is a little bit different just because of the routes that the winger had to do. At the start, I ended up playing six out of the seven preseason games just to kind of get used to it and all that type of stuff. When you play for one coach for eight years, everything is kind of tattoed in your brain – what to do, where to go and all that type of stuff. It took a little bit of time and a little adjusting at the start to kind of figure it all out, but it just seemed like – because of the style and everything, that me coming here was going to be a really good fit because we play that straight ahead power game. For me it works really well, and we just have to continue doing that.

Lucic, on playing for Darryl Sutter:
It’s been really good playing for him, I obviously have a lot of respect for a guy like him, a good Western guy and all that type of stuff. That was one of the things that I was looking forward too as well, was playing for a guy like Darryl, that hard-nosed typed of guy. He expects his players to play a certain way and he does a really good job of getting the most out of them, he’s been a lot of fun to play for, and like I said, it’s just something that’s naturally fit with me coming here and getting to play for him.