Good morning/afternoon to you from El Segundo, where we’re experiencing partly cloudy skies after heavy rain moved through the area early this morning. Did anyone else get hit by the apocalyptic deluge we experienced in the southern San Fernando Valley at 6:00 a.m.?

-The Kings did not hold a full-team morning skate. Jonathan Quick didn’t skate but is still expected to get the nod tonight against the Canucks. Jhonas Enroth remained on the ice for extra work with Andy Andreoff and Jamie McBain, so they’re likely out of tonight’s lineup.

-Speaking of tonight’s scratches, it doesn’t appear as though Kris Versteeg (upper-body) will be one of them. He acknowledged to me this morning that he felt good today; it wouldn’t be a surprise to see him in tonight’s lineup, possibly to the right of Kyle Clifford and Nick Shore in the spot that Andreoff held at yesterday’s practice. | CLICK HERE FOR YESTERDAY’S LINES

-Matt Greene (shoulder surgery) also skated at the end of practice; he’s not anywhere near a return, as reported last week. This is a long process, though it’s good to see the big guy getting some work and rehabilitation in.

-It’s a Legends Night tonight as Jimmy Carson will be honored before the game. I spoke with Carson last week, and my LAK-dot-com story is right here. It was a great chat; you may be interested in his retelling of the challenges experienced when absorbing the trade to Edmonton as a then-20-year-old, and the endurance of his friendship with Luc Robitaille. The Kings will wear their Forum Blue and gold jerseys for the final time this season.

-As for the Canucks, they’re just wrapping up their morning skate at Toyota Sports Center. Henrik Sedin (upper-body) returned to Vancouver and won’t play. Via Ben Kuzma of the Vancouver Province, they aligned as such: D. Sedin-Vey-Etem, Baertschi-Granlund-Virtanen, Burrows-McCann-Vrbata and Gaunce-Horvat-Dorsett with defensive pairings of Hutton-Sbisa, Hamhuis-Weber and Bartkowski-Biega. Ryan Miller is expected to start in goal. 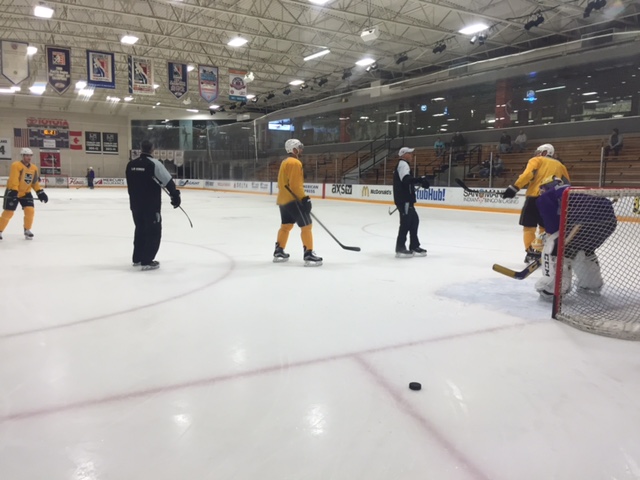