Waking up with the Kings: March 6 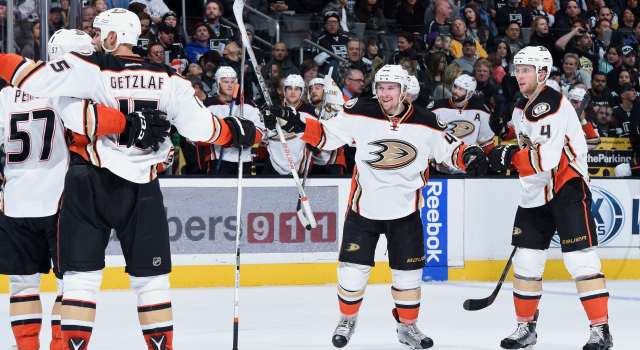 Several abbreviated thoughts about Saturday’s 3-2 loss to the Anaheim Ducks:

-It’s a bit difficult to write next-day recaps when you’re not taking notes during the game, but from a very basic sense, the Kings out-attempted a team that entered the afternoon having won 10 in a row by a 72-39 count and effectively implemented their game plan in an emotional, raised-stakes game that they did not win. A good portion of Los Angeles’ attempts came with the man advantage, but the high-quality chance index, as logged by War-on-Ice, was 9-6 Kings, and the eye test certainly backs that up. Darryl Sutter downplayed the special teams impact after the game because both teams scored twice on the power play, but I’d respectfully disagree. If the Kings go 1-for-2, and not 0-for-2 on the penalty kill, that’s a game they win. On the other hand, too, if they go 1-for-6 and not 2-for-6, that’s a game they potentially lose by two goals.

-And there was the challenge: You can’t fall behind by two in the third period to a team seeking its 11th consecutive win. Rickard Rakell’s shot, which scraped Jakob Silfverberg’s jersey before sneaking up inside the intersection of the far goalpost and the crossbar, was the dagger, even if Los Angeles forced Anaheim into a hold-on-for-dear-life-situation through much of the third period, with the visitors, who were playing their third game in three and a half days, content on chipping the puck off the glass and into the neutral zone to settle down plays in their own zone. It was effective, and credit the Ducks, too, for keeping the Kings outside of high-quality areas for much of the first two periods of the game while at even strength. As for that even strength bit, in the 10 games since Marian Gaborik was injured, Los Angeles has scored 10 goals in five-on-five play. (To be fair, they’ve only yielded seven.)

-As for individual performances, it’s still incomplete, but Brayden McNabb’s game continued its multi-game rebound after a January and February marked by inconsistency. Milan Lucic was effective, and you can tell that he’s a very good asset to have in this type of rivalry. Dustin Brown, who played an honest and effective north-south game, led all skaters with nine hits, took four shots on goal and simply extended a snakebitten run in which he appears to grade well in many facets each night but simply can’t find the back of the net or bank even the innocuous secondary assist (see: team-wide malaise in even strength scoring). Anze Kopitar, as he always is in this series, was very good.

-Now that I’ve been paying attention to the shot-on-goal counter more closely, is anyone else noticing that Jonathan Quick doesn’t always receive credit for on-net shots/tips/deflections, while the other goalie receives the borderline benefit of the doubt?