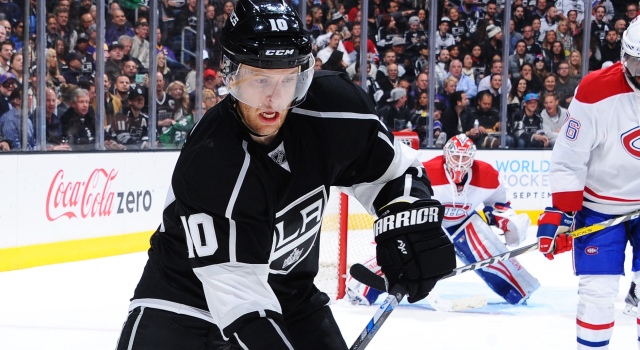 Kris Versteeg, who didn’t return to play the final 40 minutes of Saturday’s 3-2 loss to Anaheim, practiced at Toyota Sports Center on Saturday in a somewhat limited capacity and referred to his departure from the game as “a call between a couple guys” and “a precaution.”

Versteeg, who fought Rickard Rakell during some heated rancor at the 6:58 mark of the first period, said that he didn’t suffer the injury “directly” in the fight.

“It was maybe something before, a little bit,” he said.

The engagement developed innocently enough considering the primary actors. Shortly after an icing ended play in Los Angeles’ end, Kyle Clifford and Corey Perry bumped into each other and exchanged words and shoves, leading to a scrum and some aggressive hugging in the initial developments.

“It’s just hockey. It’s part of the game,” Clifford said. “High tensions, obviously. It was a big game, important. That’s the result sometimes, that’s what happened. … They’ve got a lot of good players that we’ve got to be hard on, and it’s got to be within the rules.”

There were about 10-to-15 seconds of calm before Luke Schenn and Jamie McGinn appeared to renew the hostilities, with Andy Andreoff and Kevin Bieksa earning game misconducts as Versteeg squared away with Rakell.

“I honestly didn’t really know even who it was at the time,” Versteeg said. “I just jumped in there and started grabbing guys. I could kind of tell early on that he probably didn’t [know either] when it was kind of going my way. About that time when I got thrown down, I was pretty much out of gas. Pretty much before it all started I had no gas left, so it was a lot of the shift and wrestling around, and then you get out there and you’re wrestling some more, and then all of a sudden you’re fighting. Good for him for standing in. Obviously it’s a story for him one day. It’s exciting for the rivalry.”

Versteeg appeared in two additional shifts but did not return to the bench for the second or third periods. The Kings announced that his absence was due to an “upper-body injury” and that he was “questionable” to return.

“I know when I played with Chicago, the Ducks played a lot of the same way, and obviously it’s even a little more heated being just down the highway here,” Versteeg said. “It’s nothing that I didn’t expect, but sometimes it happens. I know I don’t do as much as I did when I was younger, but it is what it is. It’s part of the game.”

During practice on Sunday, Versteeg wore a black practice jersey and was not situated on a line with any other forwards, suggesting that he may not be ready for Monday. That he skated means the injury isn’t expected to be severe; whether he’ll be available against Vancouver will be revealed during line rushes at Monday’s morning skate.

His Saturday afternoon got off to an ominous start. Prior to the game, he was struck by a deflected puck in warm-ups and when he removed his helmet following Sunday’s practice, he revealed a stitched-up gash on his forehead.

It’s part of rugged, daily life in the league, and an incident that won’t have any whole scale changes towards his warm-ups approach.

“I’ve never worn a helmet [during warm-ups],” he said. “Even in the minors, I never wore one, so that was my first time. It’s not like I’m going to wear one now, so it doesn’t really matter. I’m sure enough sooner or later that’s going to be taken out of the game, so I might as well enjoy it while I can. … It’s honestly one of the guys’ favorite parts about the game. You can kind of go out there, and you don’t have to wear a helmet in warm-up. It’s not going to change me.”

“I think it’s a big thing for the fans, too, especially [with] these top guys like obviously Cartsy and Looch and Drew, and they can really see their faces and personalities. It’s a really a good thing for fans.”