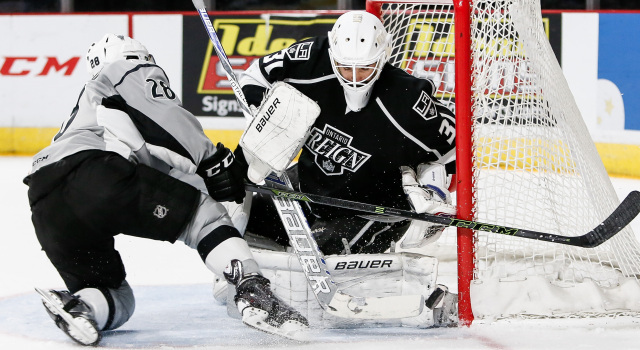 Reign game breakdown
Ontario scored three goals in the first period, including one 10 seconds in by Jordan Samuels-Thomas, and damaged the Rampage in a 5-1 rout in San Antonio on Sunday. Ontario (33-14-3-1), which last played last Saturday against Texas, took a 3-0 lead on the Rampage (24-28-8-0) going into the second period on goals by Samuels-Thomas, Sean Backman and Nic Dowd. Michael Mersch (his team-leading 20th goal) and Vincent LoVerde scored in the second and third periods respectively. Defenseman Kurtis MacDermid was forced to leave the game after taking a sucker punch to the head in the third period from Daniel Maggio and did not return (more on that below), drawing a strong response from Reign coach Mike Stothers. The game marked Mersch and Kevin Gravel’s first with Ontario since being sent back down by the Kings and Brett Sutter’s first since being acquired at the trade deadline. Goalie Peter Budaj made 27 saves and was just 3:23 away from what would have been his 9th shutout but was beat by Cody Corbett.

Three stars
–Jordan Samuels-Thomas – The winger’s 11th goal came 10 seconds off the opening faceoff as he and Justin Auger flew the zone. It was the fastest goal the Rampage have allowed in team history, according to San Antonio broadcaster Dan Weiss. But more importantly, Samuels-Thomas finished Auger’s feed from the right wing to give Ontario the all-important first marker and although Stothers didn’t think it was their best game by any means, it was a start worth noting and a start they used to set the tone.
–Ryan Horvat – The fourth-line center moved out of his normal slot to accommodate Matt Leitner, up from Manchester, and got the primary assists on two of the Reign’s three goals in the opening period. Horvat fed Backman just inside the Rampage blue line and Backman drove the right wing, eventually banking the puck off Rampage starting goalie Roman Will. Minutes later, Horvat was part of a masterful forecheck with his linemates Leitner and Joel Lowry before setting up Dowd’s 11th goal. As his linemates changed Horvat stayed on and regrouped with Dowd, who was fresh off the bench and got open to roof the puck by Will’s glove.
–Michael Mersch – For the second straight season, Mersch is a 20-goal scorer in the AHL. The left winger, fresh off a call-up from the Kings, returned to Ontario right where he left off. Mersch poked home a MacDermid rebound 7:16 into the second period, extending the Reign’s lead to 4-0. With it, he became the first on the Reign to hit the 20-goal plateau as he continues to lead the team in the scoring department despite suiting up in just 35 of 51 available games.

Turning point
Down 4-0, frustration seeped in for the Rampage in the final period. MacDermid was forced to leave the game 4:11 into the third after being sucker-punched in the head behind the Reign net by Daniel Maggio, who was reacting to a check the Reign’s rookie defenseman delivered on Sam Henley moments prior. It resulted in a 5-minute power play for the Reign and 27 minutes worth of penalties for Maggio, who was handed a game misconduct (MacDermid earned an interference call for his hit). Vincent LoVerde scored from the point on the ensuing power play to make it 5-0. MacDermid, who was seen on the game broadcast being checked by trainers and looking fairly woozy, returned to the bench in the final minutes of the game but did not take another shift.

Stat fact
–3 – Goals for the Reign in the first period on just six shots on starter Will, who was chased and replaced at the start of the second by Reto Berra. It was just the third time all season that Ontario has scored three or more goals in a first period.

This and that off-ice
Forwards Adrian Kempe (upper body) and Paul Bissonnette (mid-range) did not travel with the team due to injury as expected.

Next up
The Reign will remain in San Antonio as they face the Rampage again on Wednesday at 5 p.m. PT.