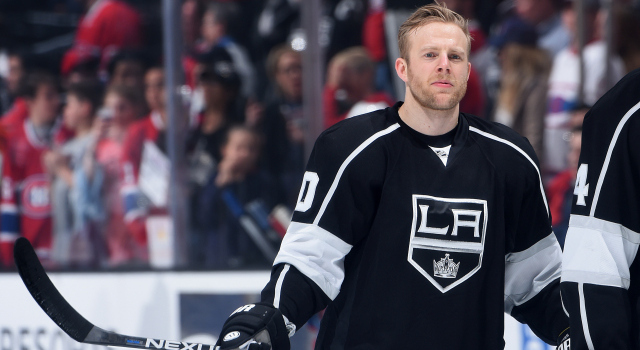 Kris Versteeg suffered an upper-body injury during the first period of the Kings’ 3-2 loss to the Anaheim Ducks Saturday afternoon at Staples Center and, though the team said midway through the game that he was “questionable” to return, did not rejoin his teammates on the bench. He left the ice for the final time with roughly one minute remaining in the first period, according to the game’s play-by-play log.

Midway through the first period, Versteeg was among the players who became engaged in the multi-fight situation that originated just inside the blue line of the Kings’ defending zone. Though it’s not confirmed that he suffered the injury during the fight, he did square away with Rickard Rakell, and late in the fight appeared to be struggling to remove his helmet. While Rakell had the upper hand in the bout, it’s tough to clearly determine from the video below whether any hard punches connected with Versteeg’s head, or whether he violently struck his hand against Rakell’s helmet. According to the play by play log, Versteeg returned for two shifts after the fight late in the first period.

Darryl Sutter does not provide updates on a player’s health status after games and was not asked in the post-game press conference about the nature or severity of Versteeg’s injury. More information will emerge in the coming days; Los Angeles is scheduled to practice at 10:00 a.m. Sunday.