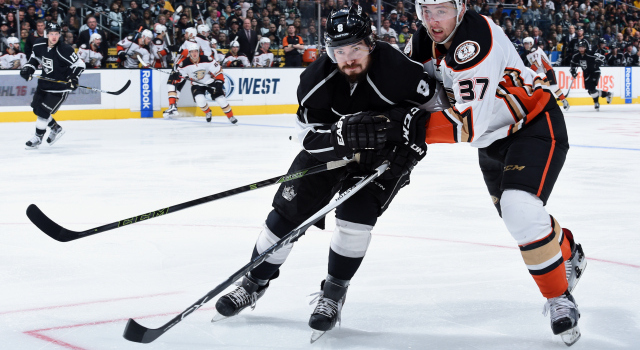 On whether the power play was the difference in the game:
Well, we both scored two goals on the power play, so that’s even. If you break it down on special teams, just looking at the four games we’ve played, we’ve both had very good power plays in terms of goals for, so really, that had no bearing on the hockey game. Against a team like that, if we tie it on special teams, that’s good. I think we played a really solid game. Couldn’t quite finish on some opps.

On whether the difference in the hockey game was the teams finishing ability:
Yeah. I think there’s obviously three or four opportunities missed, and I think the one even strength goal they scored was a goalie exchange and then Brady and Luke got caught on the wrong sides.

On whether the early multi-fight situation set the tone in the game:
It didn’t. There wasn’t that much physicality in the game, period. One fight, and that happens once in a while. Other than that, I don’t think it had anything to do with it. There were very few penalties, quite honest.

On the fallout from players lost during the multi-fight situation:
You know what? That happens. When you talk about that there, it’s more the amount of time that guys had to serve than anything else. They go down a D and we go down two forwards, that’s probably what’s more important. Over the course of the schedule or the long season, guys’ minutes change a lot then.

On the impact of the loss:
We’ve got a big division game on Monday. Just like today was a division game, so is Monday.