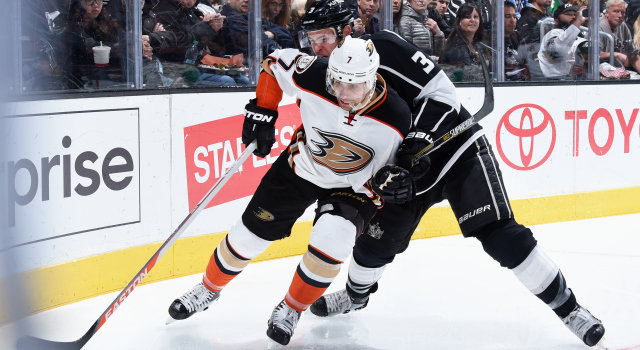 -With the loss, Los Angeles fell to 55-46-24 all-time against Anaheim, a record that includes a home mark of 33-19-11. The Kings have lost 10 of the last 12 regular season games to the Ducks, going 2-6-4 over that span. Thus far, Los Angeles is 1-3-0 in the season series, with one additional game remaining at Staples Center on April 7. The Ducks won the season series for the third consecutive year.

-The Kings fell to 21-13-2 against the Western Conference and 13-9-0 against the Pacific Division.

-Drew Doughty (1-0=1) scored his ninth power-play goal of the season, tied for the team lead. The goal ties his career-high for power-play goals in a single season (also 2009-10).

-Dustin Brown failed to record a point for the eighth consecutive game. He finished with four shots on goal, six shot attempts and a game-high nine hits.

The Kings are scheduled to practice at 10:00 a.m. at Toyota Sports Center on Sunday, March 6.