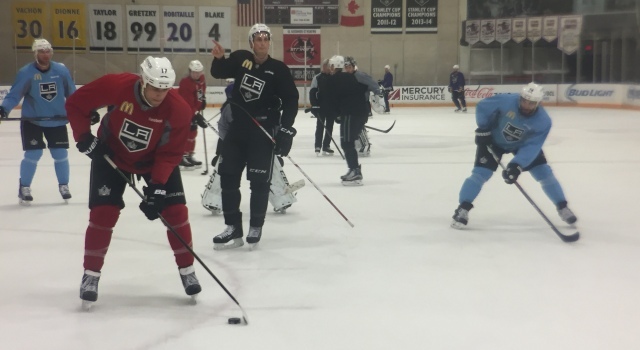 Good afternoon, Insiders, and thank you for bearing with a delay on the site today. Thank you in advance, too, for the upcoming delay on Tuesday. The Kings emerged from their dressing room at 11:00 a.m., and – WHOA, WAS THAT MATT GREENE ON THE ICE?

-Yes, yes it was. Greene has been more visible around the Kings’ areas recently, and on Friday morning he took the ice in advance of the team’s practice to get some work in. There’s no timetable for his return, and keep in mind that because both he (just under $2.5M) and Gaborik ($4.875M) are both on long-term injured reserve, and Los Angeles has approximately $4.2M of cap space currently available, according to General Fanager, there would have to be some finagling to bring both Greene and Gaborik onto the active roster, should that possibility ever present itself, which it probably wouldn’t because Gaborik is expected back around the start of the playoffs, when the salary cap doesn’t matter. Those scenarios are envisioned by Jeff Solomon anyway, so there’s no real concern there. And, with all that said, there’s no real update on Greene’s status or hypothetical availability following his December 3 shoulder surgery. So, basically, this is a long-winded way of saying “Greene skated, and there is still no real timetable for any hypothetical return date.” It’s good to see the big guy back on the ice; he’ll be happy knowing North Dakota is a serious championship contender (even if I’m expecting a 1998 redux).

Here’s a stick tap to fellow Insider and Suite Night All-Star @BabyBlueMo for the Greene tip.

-And, the not-so-good news regarding surgery: Jordan Nolan underwent it. Though it originally appeared to be a day-to-day thing, I’d received a few tips that suggested it might be something more serious, and yesterday Darryl Sutter shared the ominous We Should Know More About Him Later Today. Lisa Dillman of the Times spoke with Hockey Ops at last night’s game and shared the report first; via management, he underwent surgery on a herniated disc and is out indefinitely. All players recover differently, but Greene underwent surgery to repair a herniated disc in late January, 2013, and at the time the team announced a recovery time of “a minimum of eight weeks.” He ultimately returned on April 18. There is no timetable or hint towards when Nolan could be available. His game appeared to be coming around at the time of the injury; in 52 games this season he has five assists and an even rating.

-Lines! Let’s not forget the Kings practiced today. Via Alex Kinkopf, they aligned as such:

There were no changes in the defensive pairs, which were Scuderi-Doughty, Muzzin-Martinez and McNabb-Schenn, with McBain skating as an extra. Quick left the ice first, which matters because the #LAKingsGoalieTweetOff applies on the practice before afternoon games, not that you’d have had any doubt, anyway.

-Speaking of Anaheim, Luke Schenn spoke about the many deep-seeded rivalries he’s been a part of. “I mean the Toronto-Montreal rivalry, it was good, but it was different because when I was in Toronto we weren’t a top team, a playoff team,” he said. “I think the one other good one, well a couple other good ones I’ve played in were Philadelphia and the Rangers and Philadelphia and Pittsburgh. Those ones are huge rivalries, but this one is as good as any, if not better. I think Philly – Pitt is really good too, and there’s a lot of skill and a big rivalry built up there, but this is just as good. I think the difference is here both of the teams are at the top of the standings right now, and a lot of really skilled players and a lot of size, and it’s a real physical game for sure.”

-Of note for the visitors tomorrow: Ryan Getzlaf was a bit dinged up in the shootout win over Montreal on Wednesday and did not play in Anaheim’s 5-1 win at Arizona last night. There’s more from Eric Stephens of the OC Register:

Ryan Getzlaf will be a game-time decision for Saturday against Kings. Will see "how it feels in the morning."

It’s a lower-body injury. Also, via Stephens: Simon Despres did not travel to Arizona because of the flu. Should be a fun one tomorrow, Insiders. 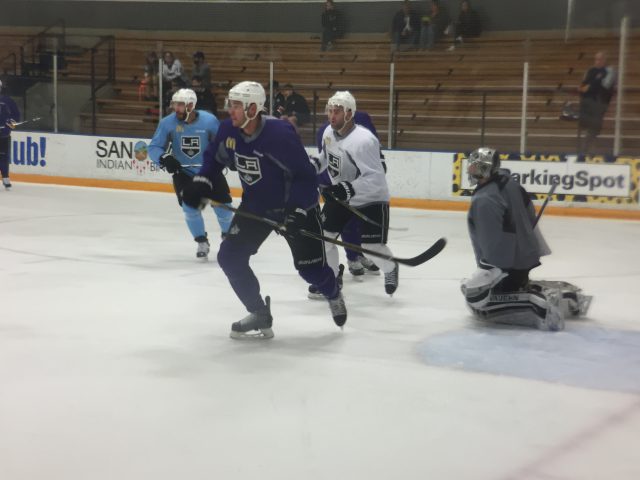