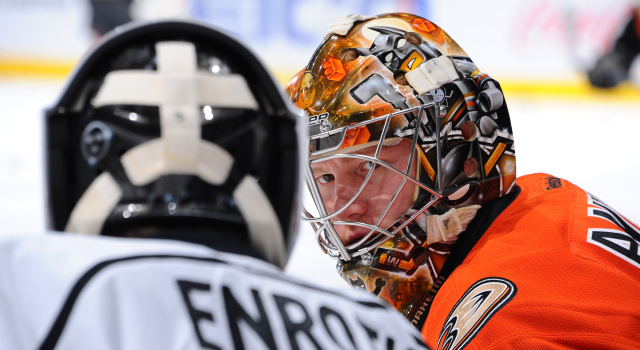 Even though Darryl Sutter has clearly articulated throughout the season that the Kings’ focus is making the playoffs, and not winning the division, or, say, the Stanley Cup, it’s still difficult to analyze Saturday’s Kings-Ducks game outside of the context of two teams (three, if you count the certainly alive Sharks) locked in a tight divisional race atop the suddenly streaking and top-heavy Pacific.

Though Sutter again today clarified that the team’s goal is to make the playoffs – “September 1 we said that,” he said – it’s still clear that there will be a charged, playoff-like environment at Staples Center even if there’s no award for Being In First Place On March 5.

“I think if you asked both teams that, both teams are probably approaching it as the biggest of the year obviously,” Luke Schenn said after Friday’s practice. “There’s still some games left in the season and a long way to go, and you don’t want too look too far ahead, but tomorrow is definitely a huge test for us, and we know what the standings are, like I said. They’ve had their way with us the past couple of games as well here, so we’re going to look to respond.”

With a franchise record-tying 10th consecutive win last night in Arizona, Anaheim enters Saturday’s game having pulled even with Los Angeles atop the division, with each team owning 80 points through 63 games. The Ducks have doubled their opponents in scoring, and with 17 power play goals they have five more than the only other NHL team in double digits over the span.

The Ducks’ puck possession game has risen spiked in the recent years of Bruce Boudreau’s tenure. With a Corsi-for percentage that has risen for the third consecutive year, Anaheim enters the game with a 53.0% CF% that ranks third in the NHL. A below-50% faceoff team for the six years ending in 2013-14, they jumped up to 52.1% last season and sit comfortably at 50.7% on draws this year, aided largely by the presence of Ryan Kesler.

Kesler, who along with several others that have experience playing in big, rivalry-type games in the building and may not necessarily receive a Staples Center welcome mat – David Perron, Corey Perry and Kevin Bieksa are among them – will oppose one particular King who has been the center of attention in a similarly emotional Eastern Conference rivalry.

And, of course, outside of the circumstances of the division or the playoff race, there’s still the fact that Los Angeles is looking to end a two-game slide to their Freeway Faceoff rivals after having claimed the first game at the Honda Center with a 3-2 win on January 17. Anaheim has lost once in regulation since then.

“Well we just know to treat it like a playoff game, we’re fighting for first place so it’s going to be a battle and we kind of owe them,” Brayden McNabb said. “They have two on us so we have to win this one.”

Milan Lucic, on the team’s ability to not overlook Thursday’s game against Montreal:
Yeah, exactly. I think the main thing was, when we had this home stand, you know before it started, we looked at our home record. We all felt it wasn’t at it’s best and what it needed to be, I mean they talk about home ice advantage, and it’s up to the players and the coaches to make sure that there is a home ice advantage and making your building a tough place to play in, and you know the fans are going to respond if you make it a tough place to play in, and the fans also provide in that. But we’re just focused on one game at a time, points are valuable, especially this time of year. Now it’s become a race for first place in the division, you know San Jose is right there as well, this last 19 games is big for all three teams in where they’re going to end up heading into the postseason, so it’s real important not to overlook any opponent, any game because two points are two points at the end of the night, and those are the only things that matter.

Lucic, on fighting for a playoff spot versus fighting for first place in a division:
The mindset is to try to put yourself in the shoes of still fighting for a playoff spot, and also, you don’t want to take anything for granted because you don’t want your game to start slipping, and that’s the most important thing. You don’t want your game to start slipping, and you want your game to be sharp for when it needs to be sharp in the most important time, and that is, if you get in, the playoffs. You’ve seen, here, in 2012, the Kings get in on the last day, and you know, their game is now sharp for when they needed it the most and they end up Stanley Cup champions, but when you’re first in the division, those are the things you talk about the most. From the time that I was in Boston, those are the things you talk about the most, is keeping your game sharp, making sure things aren’t slipping, keeping the defensive game and structure all into place, because it’s not like you can just turn a light-switch on, it’s not that easy, it needs something that you can build momentum toward, and I think that’s the main focus here, along with winning and getting points heading into the last 19 games here.

Luke Schenn, on his impression of the Ducks:
They’re the hottest team in the NHL, that’s for good reason, they’re a good combination of size and skill and speed, they’re back end’s good, they’ve got a good goalie, so they’re kind of – all areas, there’s no weaknesses, and their top guys are playing really well too. It’s a good challenge for us, obviously we know what the standings are now, like I said, obviously when you’re the hottest team in the league and you’re going around like that, you’re going to make up some ground and that’s what they’ve done. It’s a huge game for us tomorrow and a huge challenge.

Schenn, on other rivalries that compare to Anaheim-Los Angeles:
I mean Toronto-Montreal rivalry, it was good, but it was different because when I was in Toronto we weren’t a top team, a playoff team. I think the one other good one, well a couple other good ones I’ve played in were Philadelphia and the Rangers and Philadelphia and Pittsburgh. Those ones are huge rivalries, but this one is as good as any, if not better. I think Philly – Pitt is really good too, and there’s a lot of skill and a big rivalry built up there, but this is just as good. I think the difference is here both of the teams are at the top of the standings right now, and a lot of really skilled players and a lot of size, and it’s a real physical game for sure.

Brayden McNabb, on what he’s seen from Anaheim in the previous three meetings:
Yeah they obviously didn’t have the great start that you’re going to want, but I think everyone kind of knew they had a good team, they figured it out and they’re playing well right now. Tomorrow’s a big game, one of the biggest games of the year, it’s one of those statement games for two teams that don’t really like each other that much, you know it’ll be fun.