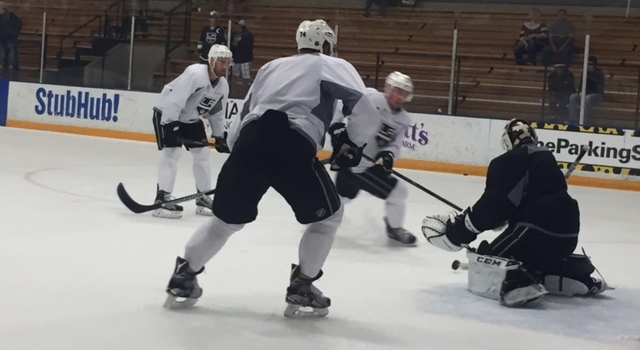 A fine Thursday to you, Insiders. Tonight the Kings will face the Montreal Canadiens at Staples Center (7:30 p.m. / FOX Sports West / KABC 790 / I Heart Radio) in the Habs’ only visit to downtown Los Angeles this regular season. On December 17, Jonathan Quick stopped all 45 shots as Drew Doughty, Anze Kopitar and Marian Gaborik scored to lead the Kings to a 3-0 win at Bell Centre.

There were no changes to the lines or pairings from Wednesday’s practice. L.A. lined up thusly:

-Andy Andreoff and Jamie McBain remained on the ice for extra work with Jhonas Enroth, so they’re likely out tonight. Jonathan Quick left the ice first and is expected to draw the start.

-Jordan Nolan didn’t skate. According to Darryl Sutter in an informal chat, the team will know more today about the status of the forward, who last played in St. Louis on February 18.

-Quick is expected to be countered by Kings alum Ben Scrivens. The Professor is 3-5-0 with a 3.00 goals-against average and .901 save percentage. Montreal lost 3-2 in a shootout last night in Anaheim with Mike Condon in goal. The Canadiens aren’t expected to hold a full team skate after last night’s game; I’ll retweet and pass along whatever updates come throughout the day.

–Four Kings were named to initial World Cup of Hockey rosters: Jonathan Quick (United States), Anze Kopitar (Europe), Drew Doughty (Canada) and Jeff Carter (Canada). I spoke with Doughty after today’s skate and will have some of his thoughts up later today. Also cool: Head Athletic Trainer Chris Kingsley will represent the United States, while Head Equipment Manager Darren Granger, who won a gold medal with Doughty, Carter and Canada at the Sochi Games, will represent Team Canada. Dean Lombardi is the U.S.’ general manager, while Rob Blake is an assistant general manager with Canada. The top two finishers of Group A (Canada, Czech Republic, United States, Europe) and Group B (Finland, Russia, Sweden, North America) will advance to the semifinals, where on September 24-25 each qualifier will play in a one-game elimination series against a team from the other group, followed by a best-of-three final series that will take place on September 27, September 29, and if necessary, October 1. I’ll have some quick Doughty sentiments on being named to Canada’s team later today; he named Sweden and the United States as the teams he’d be most excited to play against. 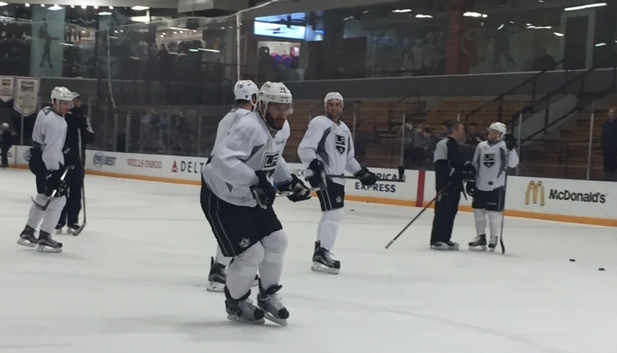