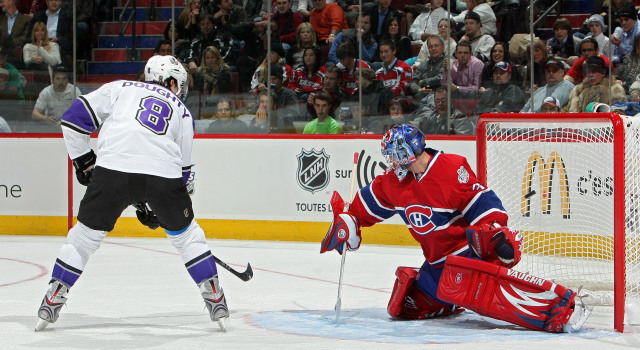 Earlier today reporters spoke with Drew Doughty about the upcoming World Cup of Hockey, the September, 2016 tournament he’ll participate in as a member of Team Canada. We’ll also speak in the coming days with Jeff Carter, Anze Kopitar and Jonathan Quick to gauge their impressions of the re-start of the tournament some six months in advance of the opening puck drop. Also be on the lookout for some quotes from both Head Athletic Trainer Chris Kingsley and Head Equipment Manager Darren Granger, both of whom I spoke with earlier today. Great news: Dana Bryson will hold down the fort on the equipment side when Granger is up north.

But, back to Doughty. After this morning’s skate, he spoke with reporters about which games he’s most looking forward to in the upcoming tournament, as well as his impressions on Montreal goaltender Carey Price, who faced shots at the Canadiens’ practice facility in Brossard, Que. earlier today and expressed confidence that he could play again this season. Price’s last Staples Center appearance came in a 2-1 matinee win over Los Angeles on December 3, 2011.

Drew Doughty, on excitement over the World Cup of Hockey:
Yeah, it’ll be cool. Any time you’re able to represent your country, obviously it’s a huge honor and something you dream of, and for it being in Toronto and your home country, it makes it even that much [better].

Doughty, on the teams he’s most looking to play:
You look forward to playing teams like Sweden. I think they have one of the best teams there and a lot of high-talented players, and they’re a good team. We played them in the gold medal in Sochi, so we’ll have a little bit of a rivalry with them. And obviously, the States – that’s a rivalry since we were kids, playing the United States, so it’ll be fun to play that team.

Doughty, on several players like Corey Perry and P.K. Subban not being named:
No, they just really could only name 16, so I guess they named the top 16 that they think they have at this time. Not that those guys won’t make the team in the future or anything like that, they unfortunately just could only name 16. I’m sure guys like that might be on the team. [Reporter: It speaks a lot to the depth of teams like Canada or Sweden.] Oh yeah, I think everyone knows those teams could probably put two teams on the ice and beat a lot of the other countries still. There’s so much depth and so many guys to choose from that a lot of skilled, high-talented players that a lot of fans or a lot of media that are going to think should be on the team, and they just shouldn’t be, and that’s the bottom line.

Doughty, on whether the Western Conference notices Carey Price’s absence this season:
We don’t really notice it. To be honest, as a western team, you really don’t pay attention to the each too much. Myself, anyway, I don’t even know half the guys who play in the east, to be honest. That’s just not playing ‘em enough, and obviously Carey Price means a ton to the Canadiens’ team. They haven’t been playing too well since he’s been gone, but when I played with him at the Olympics, he was one of the best goalies I’ve ever played with, so obviously that’s a huge missing part for them. [Reporter: Not knowing them all that well, the players from the east, what did you learn about him at the Olympics, aside from what he did on the ice?] He’s an awesome guy off the ice. I had a lot of fun with him, hanging out with him and stuff like that. And then when it comes to game time, he’s dialed in and he cares about winning, and he cares about playing his best every night, and he makes a difference out there.

Kris Versteeg, on whether he spoke with Darryl Sutter today:
Oh yeah. Yeah, I understand what I’ve got to do. I think every team I go to it’s generally the same thing, but you’ve still got to play your game within their system, so things do change a bit in your game – tendencies and certain things that you need to expected of. Darryl lets me know it’s black or white. He tells you straight up what it is, and that’s what you respect. Like I’ve said, I’ve known the Sutters for a long time. There’s no beating around the bush. They get right to it. There’s really no better way to go about your business.

Versteeg, on knowing the Sutter family:
Most of them played for the Lethbridge Broncos, and I’m from Lethbridge, Alberta. I went to Rich and Ron’s hockey school since I was five years old, and then I worked at it from about 16 to 21 and then 22, and then at 23 I bought it. I’ve known Rich and Ron for a long time, and I’ve played with Darryl’s son in Red Deer, and Brent’s son, and I played for Brent, so there are connections there. Like I said before, they’re tough, but they’re fair. I’ve played for a lot of tough coaches, and when they’re fair, that’s the best way you can go about it, and so that’s why I think everyone has a lot of respect for him.