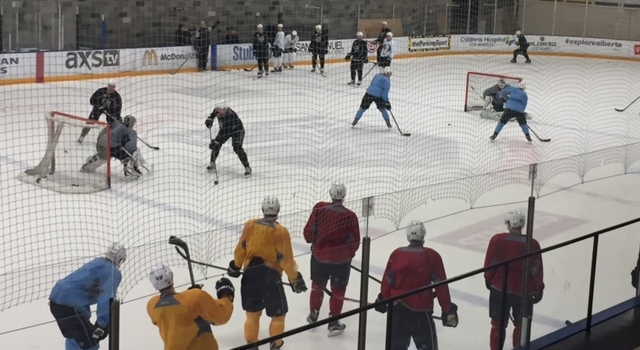 A happy March to you, Insiders. After an off-day Tuesday, the Kings reconvened at Toyota Sports Center on Wednesday and took the ice shortly before 10:00 a.m. Lines were color-coordinated as such:

-Defensive pairs were Scuderi-Doughty, Muzzin-Martinez and McNabb-Schenn with Jamie McBain skating as an extra. Jordan Nolan did not participate.

-So, here’s the update that we’ve been waiting for during LAKI’s 24-hour dark period: Kris Versteeg slotted to the right of Tanner Pearson and Jeff Carter. “I think you don’t want to just put your toe in the water, you want to jump right in and try to play whatever way you can that will help the team immediately and make and immediate impact in whatever way that might be,” Versteeg told reporters. “I understand what they want me to do. Every team has me play a little bit differently at times, but at the same they want me to play my game, so I understand that. It’s about learning as fast as I can within the system and trying to contribute and help this team win. Like I said in a previous interview, I have one goal coming here, and that’s to win a Stanley Cup.” Lots more from Versteeg this afternoon.

-World Cup of Hockey rosters are coming out. See: RUSSIA, FINLAND, CZECH REPUBLIC, SWEDEN . A reminder: These are preliminary 16-player rosters, so just because a player was omitted today (see: Sweden / John Klingberg), it doesn’t mean that he’s out of the tournament this summer. Remaining roster spots will be announced on June 1.

Team Europe will announce its roster at 1:30 p.m. PT, followed by North America at 2:15, Canada at 3:05 and the United States at 3:45. I’ve got an appointment at 4:45, so bear with a potential delay in getting up the initial U.S. roster (and potentially Canada’s). Of note: Rob Blake is an assistant general manager with Canada, while Dean Lombardi is the United States’ general manager.

-Several community notes passed along to LAKI from Kings Care and elsewhere:

BOOK DRIVE: Join the LA Kings in celebrating Read Across America week by supporting the LA Kings book drive, benefiting After-School All-Stars, GRYD Foundation and Reading is Fundamental on March 3. Donate a new book for children of any age on your way into STAPLES Center, and be automatically entered to win a signed puck! All donations will be met with a raffle ticket — increase your odds of winning by donating multiple books!

PET SUPPLIES DRIVE: Donate to the LA Kings Pet Supplies Drive, benefiting local organizations, on your way into STAPLES Center prior to the LA Kings vs Anaheim Ducks game on March 5. All donors will receive a raffle ticket in exchange for each item donated for a chance at winning a LA Kings signed hat!

TASTE OF THE SOUTH BAY: The eighth annual Taste of the South Bay, which brings together chefs, restaurants and Kings personalities and alumni, takes place this Saturday night in Manhattan Beach. More information and tickets are available here.