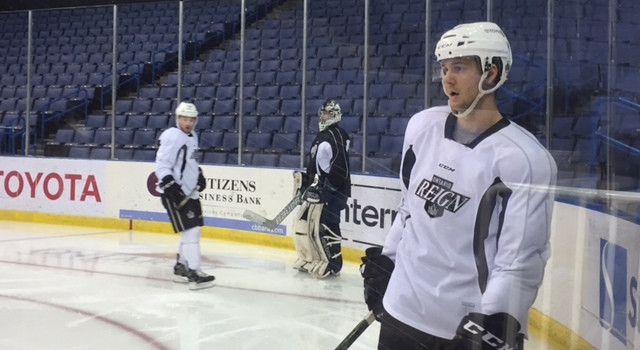 Brett Sutter, son of Kings coach Darryl Sutter and newest member of the Reign, participated in his first practice with Ontario on Wednesday.

Acquired on Monday’s NHL trade deadline from the Wild for Scott Sabourin, the 28-year-old forward is set for a fresh start and one closer to his family.

He’ll wear No. 7 with the Reign, the number previously held by Valentin Zykov, who was moved to the Carolina Hurricanes in the trade for Kris Versteeg. Sutter, who got in Tuesday night, comes from the Iowa Wild, a team that’s dead last in the AHL. So, the hockey move was enticing and he mostly redirected questions about moving closer to his family and ties to the organization with how excited he is to have a chance to rejuvenate his career.

Sutter, on first impressions of the Reign:
Hard-working team. Hard practice. Obviously this organization’s known for playing in-your-nose, fast, upbeat game, so try to get used to that pace as quick as I can and look forward to it.

Sutter, on what he brings to the Reign:
Think just leadership and veteran experience. Always being around before helps. Get comfortable right away and just do whatever I can: energy, physical, kind of play up or down the lineup. Just do whatever I’m asked. With be a winning team you’re just going to go out, whatever spot they give you go out and play hard at it.

Sutter, on what it means to him to be part of the Kings’ organization:
It’s exciting. It was a shock, for sure. I knew there was a chance, being the last year of my contract and being an older player in this league that there was a chance I’d get moved to a playoff team, so to come to a first-place team is real exciting. As far as Darryl being up top, not concerned about that at all. Just go, let the guys get to know me and they won’t even worry about that in a couple weeks.

Sutter, on his brother Chris’ reaction when he found out about the trade:
He was pumped. He called me crying as soon as I told him. Very excited. It’s going to be nice having them an hour or so down the road, getting to catch up with them a little bit.

Sutter, on any message from his dad:
I only talked to him for a couple minutes. We just try to keep the business part of it to the side. When we have our conversations it’s just like any other father-son, just excited to be here in Ontario and work with these guys.

Sutter, on getting a fresh start and struggles in Iowa:
Just the last two, three years in Iowa it’s been a rebuilding team, a younger team so we haven’t made the playoffs. It’s been a bit of a struggle there. Great group of guys, I’ve got nothing but respect for everyone there and all my teammates and everything, it was a great experience but, that being said, everyone wants to play in playoffs to have that chance to win. Just coming here, new culture, new change of scenery is never going to hurt me.

Head coach Mike Stothers, on acquiring Sutter:
We’re happy we got Brett. He can help us down the middle, he can also play the wing. Veteran presence now that Ehrhoff’s gone we can kind of fit that in.

Stothers, on first impressions of Sutter:
Today was the first day he skated with us. I’m just getting to know him as well as everybody else is but I’m pretty sure with the name, the last name, you can bet that he’s a hard worker. You bet that he competes and you can bet that he plays to win. Those are three qualities that I really like, so I see him being a good fit for us. He’s a guy, too, you look at his situation, it’s been a rough go in Iowa, they haven’t made the playoffs. He’s looking for a fresh start, he wants to be on a playoff and hopefully, you know what, we can make sure we’re in there these last 18 games. It’s a fresh start for him and a new beginning and he seems really excited about it. When you talk to a guy on the phone and he’s as excited as he was to be coming our way, it’s a good thing.