Zykov sent to Hurricanes in deal for Versteeg 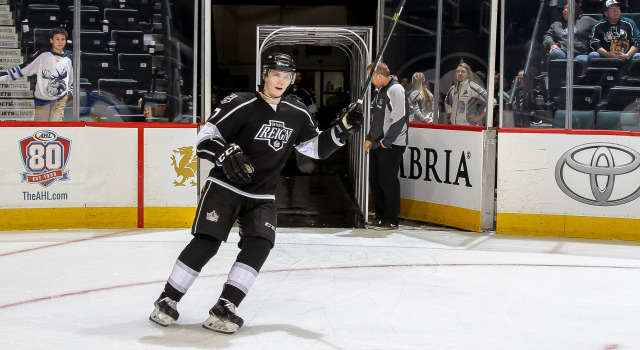 The Reign have lost forward Valentin Zykov, who was part of the deal that helped the Kings land forward Kris Versteeg from the Carolina Hurricanes on Sunday night.

Zykov, a rookie out of St. Petersburgh, Russia, had 7 goals and 7 assists in 43 games with the Reign. He did not travel with the team last weekend for a back-to-back against Texas due to an aggravated elbow injury, according to head coach Mike Stothers.

The 20-year-old Zykov was selected by the Kings in the second round of the 2013 draft at 37th overall. With the Reign, the 6-foot, 209-pound Zykov played mostly in a third-line winger role with Andrew Crescenzi and Jordan Samuels-Thomas. He was a healthy scratch in three straight games to start February and Stothers talked after a Feb. 12 loss to Bakersfield about Zykov gaining the coach’s trust.

“I liked Z’s game,” Stothers said. “He’s back in after sitting out but he actually did what I was looking for him to do. There was a play late in the second period where he got the puck out of the zone. It was a matter of you get it, if you can make a play, you make a play, if not, chip it out and make sure it gets out. And some of those things have been kind of hurting him in the fact that there’s that trust factor. Can we put him out in certain situations or in certain time periods of a period? It’s a process for him to learn and I was very happy with him and very proud of him … take what we’re offering you, apply it, make yourself a better player, a reliable player. So, that was good.”