Negotiating with free agents to be, and a “five-year plan” 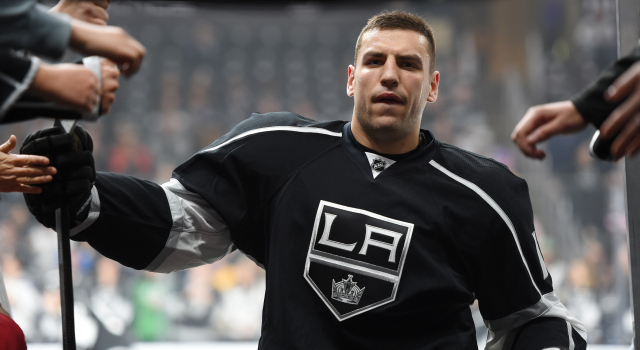 The time for extensions is nigh. If you go back one year, you’ll recall the contracts signed by Kyle Clifford and Jordan Nolan in the final week of February, and now that teams have a clear, post-deadline understanding of their assets and two-thirds of a season from which to evaluate, more extensions will follow.

Milan Lucic is due to become an unrestricted free agent on July 1. So, too, are Trevor Lewis, Luke Schenn, Jamie McBain, Jhonas Enroth and Kris Versteeg if they do not sign a new contract with the club. Restricted free agents include Brayden McNabb, Derek Forbort and Nic Dowd. According to General Fanager, the team already has $66.5-million – or $64.25 if Vincent Lecavalier retires – invested in 19 players for next season, and a bullish raise in the salary cap ceiling is far from expected.

As noted last week, the Kings have already opened up preliminary discussions with several impending free agents, including Lucic and Schenn, amongst others.

On Monday, Lombardi provided a detailed response towards the Kings’ approach towards negotiating with their free agents, and in doing so described the ongoing calibration of a five-year plan.

“I think it’s safe to say that we’ve had a number of discussions with a lot of our free agents and are trying to piece together the puzzle, and everything’s been pretty positive up to this point,” he said. “The only risk on that is you run the risk that, let’s face it, it’s not easy for some players – young, old – that when you sit down after we got Kopitar and put together your plan, you see how some things come together with Schenner and Lecavalier, and you look at your team, and then you kind of get your plan together well before the deadline. That’s the one thing too … did Sekera change things? Well, one thing it did that had nothing to do with the player was it made very clear to me that – you see people having a plan for building, right? I mean, every time you talk to a GMs, it’s ‘I’ve got a three, five year building plan.’ I guess it’s safe to say I’ve got pretty good experience in that. The reality is, as I’ve told a number of people and have talked to a lot of people, I don’t have any experience of trying to stay on top. That’s the reality. I guess I’m one of the most senior GMs out there, but the truth is it’s a different animal. It’s where we all want to be, but when you get there, you go, ‘Wow, this is different from trying to build like I did in San Jose and here.’ One thing I learned from last year was, what do you want to call it, a ‘five year plan?’ You’ve got to put that in place, and again, what you call it, a ‘plan’ or a ‘window,’ but that should have a plan, too.”

“So in learning from that experience, I think about two months ago we really started looking at a five-year plan, so-to-speak, knowing that it has to change if the cap’s going up and what players will do. But we had started after Kopitar was done, and staying within that framework and then trying to sign a number of guys – not just Looch but a number, because it’s all making them fit, right? ‘If Looch wants this, then maybe give him more term so I can get this guy who takes less term’ – the only risk to that is you don’t want players distracted, is that can happen, you worry about it a little, and what to do, ‘should I take it? Not take it?’ But we’ve erred on the side of ‘let’s open discussions here,’ because in the long run, particularly these guys you would expect to quote-unquote ‘fit in your plan,’ you have those discussions, and then other guys that you haven’t opened up yet, ‘do you want to get through these guys, because you want to move the next guy?’”

“As you guys know, it’s very hard to answer your question in a soundbite.”