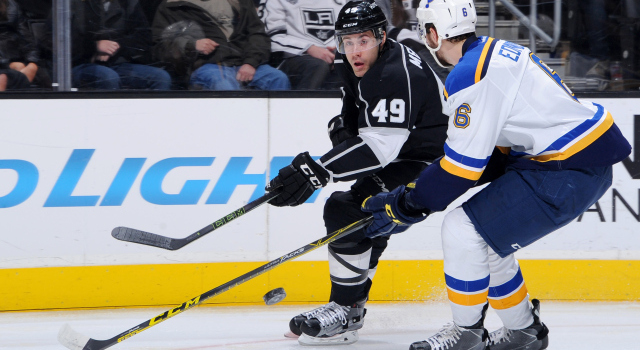 Michael Mersch was assigned to AHL-Ontario on Monday in an expected move that allows for the forward to play in the 2016 Calder Cup Playoffs if needed. The deadline for players to become AHL playoff eligible was earlier today, so you saw plenty of “paper transactions” in the lead-up to the deadline.

At the moment, there are a few too many forwards to go around for the Kings, so it would not be a surprise to see Mersch return to regular action with the Reign. Los Angeles traded for Kris Versteeg on Sunday, which gives them 14 total forwards on the active roster. Jordan Nolan is also eligible to come off injured reserve at any time, though he has not skated with the team as he remains out with an upper-body injury that the team continues to evaluate.

In 17 games with the Kings, the 23-year-old Mersch has one goal, three points and a plus-one rating. In 34 games with the Reign, Mersch has 19 goals, 28 points and a plus-six rating. After a strong showing in training camp, the former Wisconsin Badger has been up and down with Los Angeles this season, having been recalled from December 9 to 23, December 26 to January 15 and February 20 to 29.

Los Angeles returns to action Thursday against the Montreal Canadiens, while Ontario travels to San Antonio for games on Sunday, March 6 and Wednesday, March 9.