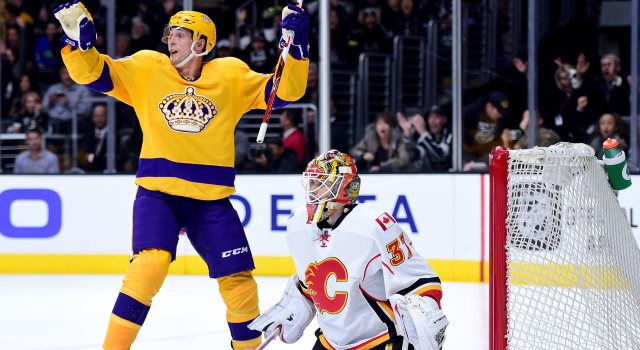 Fielding an opening question regarding the team’s trade deadline approach with an answer of “we were pretty much done yesterday,” Dean Lombardi spoke about the Los Angeles Kings’ acquisitions and the organization’s mindset in the final hours prior to the 12:00 p.m. PT deadline, which passed with 19 trades being made on a relatively quiet Monday across the league.

“Once we got the defenseman, the only other thing we were looking at was obviously with Gaborik out, looking for the experienced player who can play in your top-six,” he said. “I talked to a lot of people today, but I didn’t anticipate anything, and it didn’t surprise me.”

Los Angeles did make one move Monday, sending Scott Sabourin of the Ontario Reign to Minnesota for Brett Sutter, a son of Darryl Sutter’s who had played with AHL-Iowa this season.

As noted, the Kings were more listeners on Monday after having acquired Vincent Lecavalier and Luke Schenn in January and Rob Scuderi and Kris Versteeg in advance of today’s deadline.

“This process starts, you get a bunch of cue cards and you put the team on and you work through so you can go back to conversations two, three weeks ago in terms of buyers and sellers,” Lombardi explained. “I mean, essentially it comes down to you’re not doing your job unless you’ve talked to just about every team except the ones in your division … because it’s just not practical. But essentially over a two-three week period you talk to just about everybody. It has a frontal effect on guys you continue to check in with, and then as you narrow it down, it gets smaller and smaller, and after last night, today … you get more incoming calls because teams are still looking to move people. This is a two-three week process, and quite frankly, you could say that getting Lecavalier and Schenn when we did was part of this same chain of events, it’s just that we did it earlier. We probably started the ball rolling in terms of trade deadline with that deal.”

Though he has more deadline hits than misses – think Jeff Carter and Marian Gaborik – last year’s acquisition of Andrej Sekera for a conditional first round draft pick and prospect Roland McKeown has not sat well with Lombardi over the past year. Sekera appeared in 16 games with the club last year before suffering a knee injury that kept him out of the remainder of the regular season. Los Angeles failed to qualify for the playoffs, and on July 1 Sekera signed with Edmonton as a free agent. Multiple times, Lombardi took time to note that that there was never an iota of frustration or ill will towards the player.

“Like, you always learn from things, right? Obviously it’s no reflection on the player. He’s a good player,” he said. “But there is an issue of timing, there is an issue of cost, and there’s an issue, let’s face it, of how the team fit. And this is one case where I guess hindsight is 20/20, is when you can evaluate the value of a deal. Yeah, I mean, you learn from every deal you make – good and bad, and it’s not the player that gets the result, but that’s all part of gaining experience and learning from it. You learn from that one, just like you learn from the Gaborik one, and that’s just the nature of the beast. You’re going to make mistakes, and you better face up to it, but I just wanted to make clear it’s not a mistake in the sense of the player. It’s a cost factor, it’s a timing factor, and then it’s a result factor that is not a reflection on the quality of the player.”

It isn’t by coincidence that each of the Kings’ acquisitions last week have each won two Stanley Cups. Asked how important it was to bring aboard players who’ve won before, Lombardi answered, “huge.”

“Rob was fairly easy,” he said. “The biggest thing to it as you saw that work out, that in keeping your eye on the cap and then the thing with Rob was obviously next year’s salary. Like, I could’ve gotten him earlier, but there was an issue in the money the next year. But the way that is now structured, it was almost like you’re not going to get a better player than that for what we’re going to end up playing, and then it becomes the issue of, OK, before we did it, we went back and Darryl and the coaches and I and Blakey, we sat and watched Rob’s game in Pittsburgh and Chicago, and then we put in the games that he played in the conference finals with us before he left and then tried to make a decision on ‘was the drop-off,’ so-to-speak, an issue of his slower or whatever, or maybe the role and the fit not being right and him being caught in between, and I think all that work was being done, we got permission from Chicago to talk to him before, and one thing good about it is he knows what Darryl expects, and I talked to him about the team now, and the other thing too about moving his family. It was critical that one of the reasons I think he left was because his wife wanted to be closer to his family. ‘I don’t want you coming out here if your wife’s staying back east,’ and she was all excited. And the guy, he commands a lot of respect in that room. And like I said, for giving what we have to pay him, as well as fitting in, it’s almost like, ‘Well, it makes too much sense,’ and then on [Versteeg], you’re right. You’ve seen us do that before, right, when we got Stoll, or Mike. It was either guys who had been to the finals or won. A lot of those veterans had been in that position, and certainly Versteeg fits that. And the other thing, too, is Darryl’s very familiar with Versteeg, so even though we’re not as familiar with him as maybe a Scuderi having been here, there’s also a history with Versteeg with the Sutter family, if you go back to his time in Alberta. But the winning part you’re talking about, absolutely. It’s a war zone. You better know what you’re getting into. Now I think we just got a taste of that last night.”

Dean Lombardi, on whether he’s comfortable with where the team stands despite the tightening of the Pacific Division race:
I think I said this to you guys, and I said it to the players. A couple things – there’s always a different set of challenges in terms of what this era is going to stand for, and one of them is, in fact, having a better regular season and not having to [settle for] seventh or eighth place, because there is an advantage to it as well as a challenge. You should want to win your division as well as the Stanley Cup. Well, we all know the Cup’s the most important by far. However, it’s still a challenge that any team that’s going to want to pride itself on being a top team, it’s to be good during both and excel during both. So that is one of the goals they had set out to, and now for the first time, these guys, they got off to a big lead, and there’s a mindset that a real pro has to learn to deal with. ‘Well, you’ve got a big lead, so what are you going to do with it? Are you going to let some games go that you weren’t ready for, or are you going to meet the challenge?’ I think they’re in the midst of that now. You can’t look back and say, ‘Well, this happened four years ago or three years ago, you had a big lead and let it go.’ But this is new turf for a lot of them, and it’s also new in the sense – and you’ve heard me talk about it, too – that the transition and the leadership group, because we lost some guys that knew how to win, that some guys are responsible for taking over and making sure this doesn’t happen. So ‘am I comfortable?’ No. I mean, I’d like to have a 20-point lead, I mean, quite frankly, if we still had a 10-point lead I probably wouldn’t be comfortable. But I think last night, is everybody who called me today, all the calls that I took, as one of you just said, a lot of the ‘incomings,’ I think every conversation started out and said, ‘What a game last night. That was one intense game, that was a high-level playoff game.’ And I think it’s very clear that this battle between these Southern California teams, and it’s not going away anytime soon when you look at the average ages of our two teams, I guess that’s what sports is supposed to be about. Hell, after the intensity of that last night, if you had a 20 point lead you still wouldn’t be comfortable, because that’s a war. You better show up ready to play. I mean, that was a man’s game last night. And like I said, every general manager who called me today started that conversation saying, ‘What a game that was.’ Other than the fact that we had to wait 10 minutes for a decision [on the disallowed goal], but everything else was pretty good.

Lombardi, on whether other teams’ trades put pressure on him:
No, I think now you’re getting into one of the original questions here that I alluded to. You’ve got to have a plan and stick with it in building, as well as the quote-unquote ‘window,’ and I’ve never been that ‘oh he did this, we gotta to do that,’ I think that’s dangerous. I clearly don’t think it came into playing here because one of the things, the money, remember if you look and we had to take a piece of Ehrhoff for this year, well I knew Stan was getting Ladd, so part of the reason I got held out was that part of the money that he had to have, so yeah, I’ll add Scuderi, I know you’re getting Ladd so that’s why you have to have 50%, do what you’ve got to do, it doesn’t surprise me one bit. I mean, he could have got you that he was going to do that two months ago, and he’s really good at what he does, there’s no doubt about it, and if you looked at it, it didn’t surprise me one bit, but is that going to make us go out there and say ‘well we’ve got to do this and that’, no, no I think that’s dangerous. You’ve got to look at your team, and it’s always been ‘how good are we’. Yes, you look at your match ups, but I think if you get yourself into that you may be throwing around first-rounders before you know it.