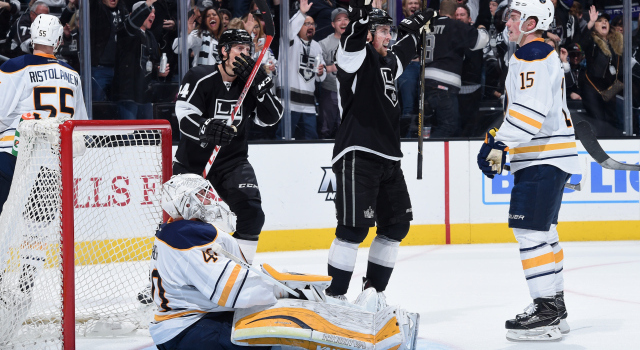 After the Sabres had their chances early and controlled play through the first eight to 10 minutes of the game, the Kings gave up very, very little in their 2-0 win at Staples Center. By the middle of the second period – a very strong second period by Los Angeles, it should be added – Buffalo wasn’t sustaining any semblance of an attack and was getting few looks from down low in the offensive zone. After the first period, the visitors’ best chance came during the 30 seconds of chance-trading at both ends, when both Robin Lehner and Jhonas Enroth were called upon to make a flurry of saves in an up-tempo sequence. The Sabres have had trouble scoring all season, and against a Kings team that’s now 4-0-1 in their last five games despite scoring a grand total of nine goals over that stretch, Saturday night’s game didn’t present the clearest opportunity for the visitors to strengthen their offensive credentials.

Part of the success Los Angeles had in keeping Buffalo off the scoreboard came from an airtight penalty kill. I just spoke with Darryl Sutter, who liked that the team didn’t take many penalties to begin with – the Dwight King hook on Jack Eichel was also probably a bogus call – but I’m willing to believe that last night the team had the most full length clears per 60 minutes out of any game to this point in the season. The Sabres were hardly able to set up in the offensive zone, and that’s because the Kings were efficient on the faceoff dot, winning four of six draws while shorthanded, and suppressing high-quality opportunities. Via War-on-Ice, Buffalo logged one total scoring chance in six minutes of power play time. 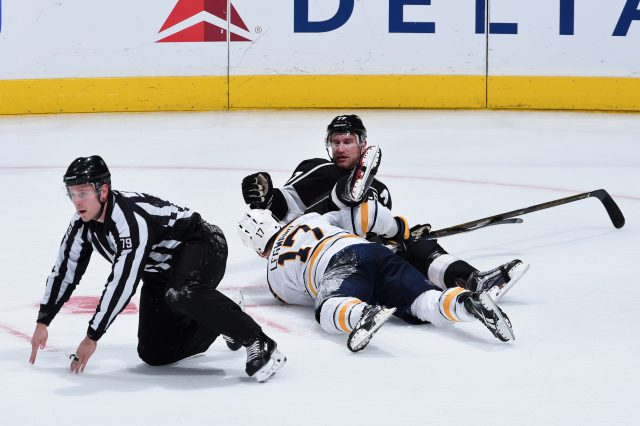 Rob Scuderi was efficient in his return to the Kings. While people should be wary of a 37-year-old Scuderi getting 19 minutes regularly, hey, let’s face it, he never really had a step to lose in the first place. He’s built an impressive career through his positioning and intelligence, and those aren’t aspects that deteriorate like other more skill-based attributes. There was clearly an unholy marriage between the veteran defenseman and the up-tempo Blackhawks, who have found success without the puck when their quick forwards close a gap with their defensemen on the backcheck, and the defensemen are content chipping the puck off the glass and out of the zone when pressured. Despite his limitations, Los Angeles is still a more comfortable fit for both sides. Scuderi still has a very good stick; tonight, though, will present a stark challenge as he faces a Ducks team capable of making heavy hits below the goal line and forechecking opposing defensemen into key turnovers deep in their defending zone. If he’s in a 14-minute range, he should ably fill a depth role on the blue line; if he’s seeing 19 minutes more regularly, there’s an uncomfortable potential for high-risk situations against the Western Conference’s elite teams.