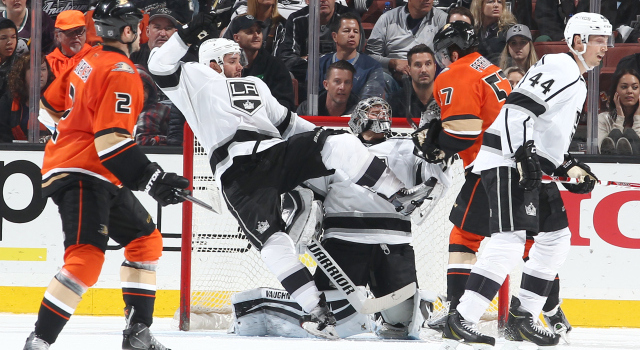 On the officials failing to put time on the clock after the disallowed goal:
Well, there should have been. Were you watching the game? … So should there have been time? … So if you thought there should and they didn’t, then they made a mistake, didn’t they? Ask the question in full so I can know what you’re talking about.

On the penalty kill:
If you were at the game last night, someone asked me that today about it, and our penalty killing was really good, and I don’t think the penalty killing tonight was an issue even though they scored three goals. We could’ve scored two, too. Both teams have really good power plays. I think that we made some tired mistakes. I think guys looked a little gassed. Even the one in the third with Tyler against their defensemen, that’s going to happen when you get caught in a turnaround against a good team like that.

On Kris Versteeg:
I think he gives us some depth and the ability to finish and play all positions for us. It’s important. Gabby’s out, and I think that it showed up even tonight where we’ve been using three and a half lines, basically, when you look at minutes played. Especially in back-to-backs, you need four lines, four good lines.