Salary cap implications of the Scuderi trade; Gravel to Reign 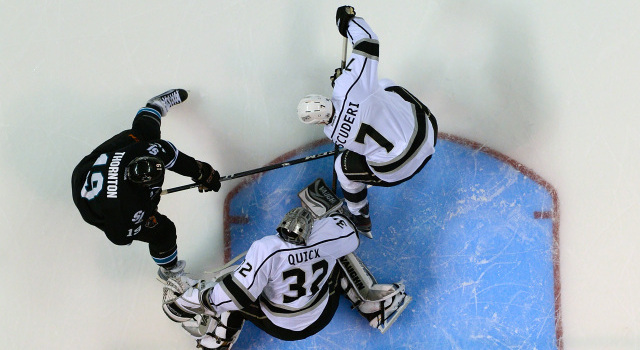 Several figures LA Kings Insider had learned of earlier this morning were confirmed by Sportsnet’s Elliotte Friedman: The Kings will retain 15% of Christian Ehrhoff’s salary, while the Blackhawks will retain 50% of Rob Scuderi’s salary (which had already been reduced by a third in a trade earlier this year with the Penguins).

That means the Kings will be dinged for $1.125-million this year (and next year, barring player movement or retirement) for Scuderi and $225K for Ehrhoff. That recalibration lowers the club’s cap space to $2.108M. Should the Kings choose to put Marian Gaborik on long-term injured reserve – something they have not yet done – they would receive an additional $4.875 of cap space for a total of $6.98-million, according to financials available at General Fanager.

More importantly, Los Angeles has allocated $63.143M to 18 players for the 2016-17 season, dollar figures that include Mike Richards’ cap recapture and settlement but not the retention-affected $2.25M cap hit for Vincent Lecavalier, who has indicated his intention to retire. Milan Lucic, Trevor Lewis, Luke Schenn, Jamie McBain and Jhonas Enroth will become unrestricted free agents if they do not sign a new contract with the club in advance of July 1, while Brayden McNabb, Derek Forbort and Nic Dowd are due to become restricted free agents. Preliminary contract discussions have already begun with Lucic and Schenn, amongst others, in their free agent crop.

The Kings are likely to make an additional move to bolster their forward group in the wake of the injury to Marian Gaborik, which is expected to keep him out of action for 10-12 weeks. There have been advanced discussions to bring a forward in, though nothing at this point has been finalized.

Because the Kings needed a roster spot to accommodate Scuderi’s arrival, Kevin Gravel was assigned to AHL-Ontario. The defenseman who turns 24 two weeks from Sunday averaged 11:07 in four games, and while he did not record a point and totaled a minus-one rating, appeared to adjust well to the NHL’s pace.