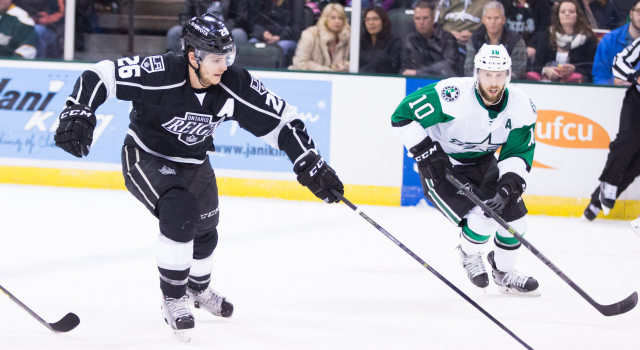 Reign game breakdown
Vincent LoVerde scored two goals including the winner 2:25 into overtime and the Pacific Division-leading Reign (31-14-3-1) picked up a crucial two points on the road against second-place Texas (32-19-4-3) in a 3-2 win on Friday night. Sean Backman scored the sure go-ahead goal with just 33 seconds left in regulation but a late penalty by Andrew Crescenzi allowed the Stars to skate 6-on-4 with their goalie pulled in the waning seconds and they tied it on a goal by Justin Dickinson with just 5 seconds left in the game. LoVerde answered in the extra frame for his 8th of the year, trailing the play and blasting a set-up feed from Backman past Stars goalie Maxime Lagace. Reign goalie Peter Budaj made 21 saves to pick up the win and the Reign improved to 5-0 against Texas. Lagace had 48 saves for Texas.

Three stars
–Vincent LoVerde – The Reign captain scored a big early and a bigger goal in overtime for his first two-goal game of the season and his 7th multi-point game. LoVerde’s shot from the right point tied the game at 4:47 of the first period after Texas took a 1-0 lead 1:11 in. LoVerde started overtime with Nic Dowd and Backman and although they couldn’t score despite quality pressure their first shift, they made due their second go-round. With LoVerde trailing the play Backman dropped a pass back just inside the blue line to LoVerde, who sent a high shot by Lagace to end it. The goals were the 7th and 8th of the season for the Reign All-Star.
–Nic Dowd – The top-line center set up the goal that made it 2-1 after 35:26 of scoreless hockey, making a great read to take the puck from Texas just inside their blue line. Dowd’s smart effort led to sustained pressure for Backman’s tally. Dowd now has points in three of his last four games.
–Sean Backman – Backman was the beneficiary of Dowd’s read and Justin Auger’s puck work down low before getting open for a pass from Auger to send a shot through Lagace from the left circle with 33 seconds to go. It seemed like his goal would stand until Dickinson’s turn of events, but Backman, Dowd and LoVerde pushed the team on in overtime. The All-Star Backman used his skating to get up quickly on the right wing, leaving the pass for LoVerde to finish. The veteran right wing reached the 40-point mark (14 G, 26 A) and collected his 7th multi-point game of the season.

Stat fact
–0-for-20 – Luckily for the Reign’s case in this one it didn’t play a factor, but their power play is on quite a woeful streak, coming up empty in its last 20 tries spanning six games now. Entering Friday’s contest 0-for-their last four games (13 attempts), Ontario added to that with an 0-for-5 showing against the Stars. Their last goal on the man advantage came from Auger in the first period of a Feb. 12 loss to Bakersfield.

This and that off-ice
Forward Valentin Zykov (elbow) did not make the trip due to injury. It was already known that injured forwards Adrian Kempe and Paul Bissonnette would not travel. … Defenseman Kevin Gravel was reassigned to the Reign from the Kings after a trade brought Rob Scuderi to the Kings and sent defenseman Christian Ehrhoff to the Blackhawks. Gravel was sent back to the Reign to make room for Scuderi on the Kings’ roster, but will not play in this Texas trip. Read more about Zykov’s injury and Gravel here.

Next up
These teams will go at it again on Saturday for a 5 p.m. PT game to wrap up the back-to-back.