Checking in with Kopitar, Toffoli on an off-ice day 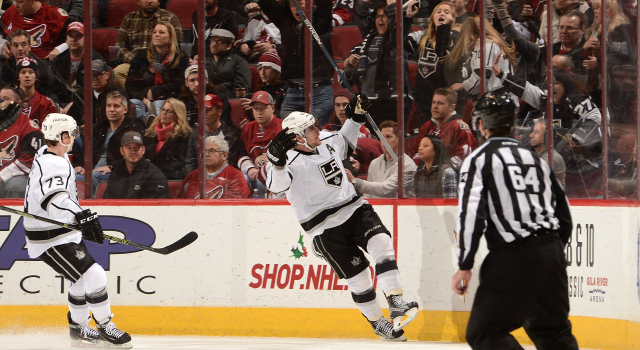 Most of the Kings didn’t skate on Thursday, though Michael Mersch and Jamie McBain took the ice with Jhonas Enroth and a life-size shot-blocking mannequin in hockey gear under the watch of the team’s coaching staff, minus Darryl Sutter. During the skate, we checked in with Anze Kopitar – who was involved in a charity event – and Tyler Toffoli to learn about the team’s sentiment in advance of Saturday’s game against Buffalo.

The newest King, J. Mannequin Landry, was beaten badly on this play. pic.twitter.com/0ifmZqvkHl

Anze Kopitar, on winning important faceoffs against Edmonton:
I actually started off slow, but then battled back a little bit. I think we as a team started off really, really slow and then battled back, I don’t know what the reason is and whatnot, but you know again, at the end of the day we won the faceoffs that mattered and we actually scored a faceoff goal, so that was huge for us, obviously. I guess what I’m trying to say is sometimes they don’t ask how, but the end result is the one you look at, and it was good for us last night.

Kopitar, on the history of winning important low-scoring games:
Oh absolutely, there’s no doubt in my mind that we can be a championship team, for sure. And saying that, we’d also rather be in a slump right now than come April time. You have to work at it, it’s not just going to come out of nowhere, you’ve got to work at it, you’ve got to improve every aspect, coming out of our zone, in neutral zone, into the o-zone, it’s not just the one zone, you’ve just got to improve all over the ice so you can get chances off of that, create scoring chances that you eventually score on.

Kopitar, on whether scoring goals can be taught:
Scoring is a very large word, I guess. I don’t think you could teach Carts’ scoring per say, or Ty’s scoring for that matter, you know you can teach people to go around the net and tip pucks and everything, you can teach that, but you also have to have a nose for it.

Kopitar, on any different looks at center following Vincent Lecavalier’s addition:
No, I think right now for us, it’s very nice to have two left-shot centermen, two right-shot centermen, and just for different types of PK faceoff, end-zone faceoff. There’s obviously a couple of other guys that can take faceoffs too. Lewy’s very good, Andy’s very good at it too, so it just gives you a few more options just in case something happens during the game that sometimes does. It’s definitely nice to have Vinny there with his experience, and I think he’s taken on this role with a lot of pride, and that’s what we’re going to need him doing that going forward.

Kopitar, on how he felt in his second game back:
I actually felt better, I felt like I was skating better yesterday. The Calgary game, that first period, the legs were a little bit heavy because I hadn’t done anything or skated very hard in four days, so I kind of knew that was coming. In saying that, I don’t think the game itself helped me very much because we were literally playing ping pong in the neutral zone, so you’re just chasing the puck the whole time, and that obviously doesn’t help but I just felt better as the game went along, and last night I felt like I normally do.

Tyler Toffoli, on his line generating an attack against Edmonton:
I think we just found a way to get pucks to the net and get pucks behind their D, and we just went to work and things worked out. We had a couple of good bounces, went to the net, and scored a couple of big goals.

Toffoli, on any exchanges or alterations between the second and third periods on Thursday:
I think the first two periods we weren’t really happy with our game, we knew that they were getting everything that they wanted, they were getting chances off the rush and I think when they scored their goal it was a real big wake-up. You know we had to play the right way, and I think that’s kind of what got us started, and I think next time we need to be ready to go right off the start and don’t wait for them to score their goal to give our push.

Toffoli, on whether he was happy to see Jeff Carter capitalize given recent chances:
Yeah, I think we were both in the same boat. We’re both getting our five-six shots a night, which is really good, but I think at the same time you’ve got to bear down on your chances, you need to go to the net, and that’s what he did, he just went to the net and jammed it in, and hopefully for him and myself, we can use yesterday and kind of get ourselves going and get ourselves on a little roll here.

Toffoli, on any acknowledgement towards the tightened divisional race:
We’re just playing hockey. We know we can’t control how other teams are playing right now, right? Obviously Anaheim has been playing great, and San Jose, they’ve been winning a lot of games. We have to be worried about ourselves, worried about ourselves winning games, playing the right way, and just gaining momentum throughout the remainder of the season.