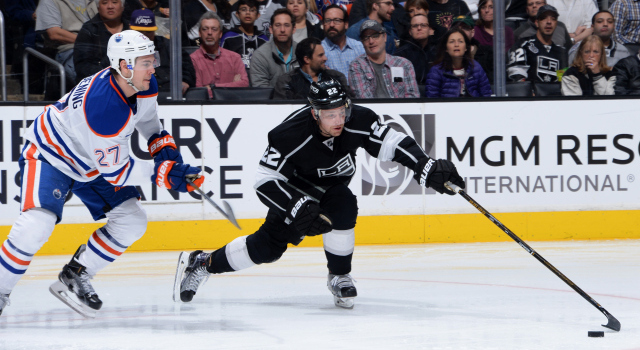 On the Kings’ strong finish:
I think their forecheck was really good in the first period, and I think once our defense got their feet moving and got the puck moving in the second period we were really good. Eventually we scored. [Reporter: It looked like you kind of just wore ‘em down by the time the third period started.] As I said, I think the first period, they put a lot of pressure on us with their forecheck and their speed, and we didn’t handle it very well. I think once we made that little adjustment – that’s why there’s 60 minutes, not 20.

On Dwight King taking the faceoff that led to the tying goal:
[He] doesn’t take very many. If there’s only one centerman out there, it’s kind of, who do you think’s going to try it? Hey, the line was good. Somebody went to the net, somebody shot the puck. That’s how we scored two goals. We had lots of guys on the outside in the offensive zone. That line had somebody driving towards the net.

On what he saw from the Oilers early:
They’re a fast team, and they want to play that line rush, get the puck past you game, and they’re good at it. A bunch of young guys with lots of energy and skilled guys. I mean, they’re good players now. They’re going to have to take that next step.