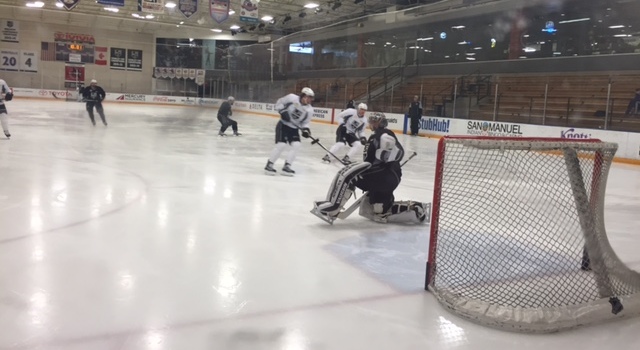 On his high minutes and taking them down moving forward:
I enjoy playing a lot of minutes but at the same time I realize that it’s probably not a good thing for me to be playing that many minutes for the season until playoffs begin because, I don’t think personally I’ll be out of gas, but the coaches have told me many times you can’t be playing that much, this often. I’m expecting my minutes to slowly go down every game and kind of get back 27, 26, something like that. Yeah, I love playing as many minutes as possible but I realize I can’t do it. [Reporter: It’s not sustainable.] No, it’s not. And I think it’s been proven in years where you see guys that are playing 29 minutes throughout the season and then they start not performing well when playoff time comes. That’s the last thing we want. When playoffs come that’s when I need to be playing my best and need to be feeling my best. So, I think that means that my minutes will have to come down a little bit.

On if he’s antsy when he’s on the bench:
Oh yeah, even when I’m playing 32 I’m antsy. If I go a few shifts without touching the puck or something like that, I just want to get back out there and make a difference out there. I can’t get frustrated in those situations or anything like that but I want to be out there every second of the game if I can. [Reporter: Phil Esposito once talked about playing a whole game. Never coming off.] That’s not possible.

On how he’s able to handle the big minutes:
The reason I’m able to play 30 minutes some nights is because I keep my shifts short. If I’m keeping my shift length around a 45-second average, I’m fresh all the time and I’m going out there, doing what I need to do, getting off. Getting a quick rest and back out there again. Once you get into minute-long shifts and get stuck out there on a long PK or something, that’s when it really hurts ya. We train all summer and have been training our whole lives to train for that 45-second shift and have a 45-second rest. When I’m able to do that I feel fresh all the time.

On if playing big minutes caught up to him last year:
No, no. I felt great last year. No, I don’t think it did at all. Whether or not other people feel that way, I don’t know. But I know personally I felt great last year, especially near the end of the season the last few games when we were trying to make a push to get into the playoffs I thought I played some of my best hockey. And we weren’t able to do that obviously, but not expecting to, like I said, play 30 minutes the rest of the season.

On the value of Jonathan Quick and his competitiveness:
Definitely I think he’s one of the best goalies in the league. He’s probably got one of the best defensive teams in the league in front of him, too. But he’s obviously one of the biggest parts … the reason to that. When we need him to come up with a big save he seems to always make it. Thirty wins in a season is amazing for a goalie and I wouldn’t rather have anyone else but him back there. [Reporter: He’s had some injuries, but for the most part he’s been able to be in net.] Yeah, he’s a competitive guy. He’s probably the one guy on the team that when it comes to competitive people he’s right there with me where we will battle to the end about anything. He wants to win and that’s all he cares about and he’s going to try to perform his best and if he doesn’t, he’s upset with himself. That’s what you need from your top goalie. He takes onus on his own play and he wants to win hockey games.

On how long he’s going to keep his beard:
I don’t know, we’ll see. It’s been working.