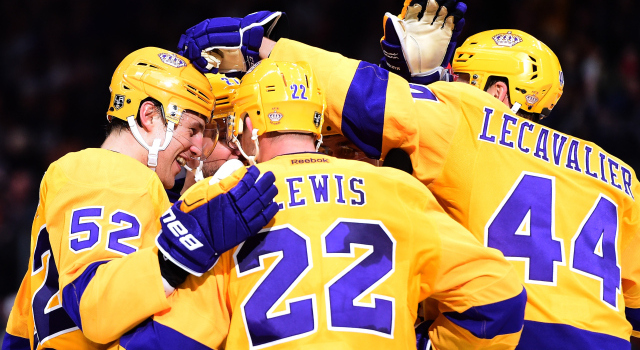 The Kings’ 2-1 win over the Calgary Flames Tuesday night wasn’t the most appealing on the eyes, though the first game back after an extended road trip rarely is. As players readjust their body clocks and may be challenged finding and sustaining their legs, that first home game after a long trip produces unique challenges when compared to the other 78 games or so on the schedule. Still, L.A. importantly claimed two points in a game in which they yielded chances few and far between to an opponent that had difficulties sustaining any sort of attack or generating quality opportunities between Johnny Gaudreau’s straight-away look at net in the first period and the inevitable third period push. Via the play by play log, the Flames’ first shot on goal from within 15 feet of the net was Sean Monahan’s game-tying power play marker midway through the second. Calgary didn’t take an even strength shot on goal within 10 feet of the net until Sam Bennett’s net-bound drive 45:44 into the game, and finished with an average shot distance of 40.9 feet on 23 shots. In Los Angeles’ zone, there was probably 45 seconds of scramble time, and 59:15 of cool and collected checking hockey that didn’t cede anything close to a surplus of shot attempts or chances against.

At the other end of the ice, the Kings, as they often do, got pucks through to the net, even if the 62 shot attempts represented a par-for-the-course total in terms of the top possession team’s ability to sustain offensive zone pressure. Joni Ortio was very good, but there were no real gravity-defying, standing-on-his-head sequences – only a well-positioned and square performance that gave his team a chance to win the game. He slid to his left to deny Kyle Clifford and also relied on a Clifford attempt on a rolling puck that caught the crossbar in some of the dicier moments, but for as much offensive zone time the Kings had, it wasn’t quite in lockstep with high-quality, Grade-A opportunities. The Flames’ top defensive pair admirably handled the top two lines, which led to Vincent Lecavalier and Nick Shore’s lines establishing a possession advantage as Calgary’s depth didn’t quite keep up with Los Angeles’. 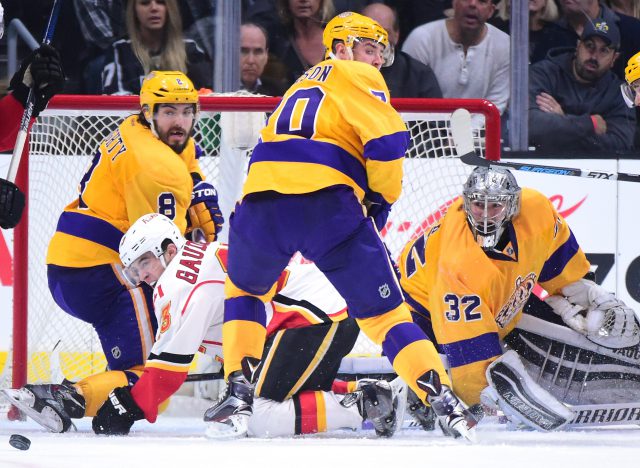 Though the Kings held a clear possession advantage, there was still one of those uncomfortable auras surrounding the game that gave the sense that the Flames were right there, ready to strike and tie the game up. (They didn’t.) Unlike last year, Calgary has experienced significant third period struggles this season, and when Ortio was pulled for the extra attacker with under two minutes remaining, Los Angeles forced an icing, and after a time out, Darryl Sutter addressed the players he was about to send out for the offensive zone faceoff, and from reading his demonstrative expressions, wanted them to rim the puck behind the net and check behind the goal line should they win the draw. After an Anze Kopitar faceoff win, Jake Muzzin rimmed the puck deep, and the Kings’ forecheck ticked important time off the clock while draining energy from the Flames’ top line. In the end, Calgary attempted three shots with Ortio pulled: attempts by Mark Giordano and Monahan that were blocked (by Lecavalier and Drew Doughty), and a 61-foot shot on goal by Gaudreau. Los Angeles gave up very little of any real chance or danger in the 2-1 win.