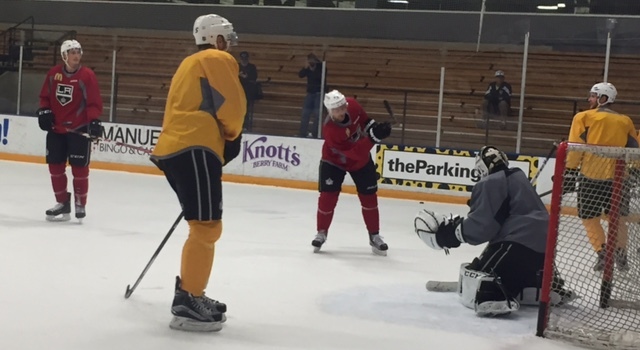 Good afternoon from El Segundo, where the Kings took the ice shortly before 11:00 a.m. It was a full team practice, and the only changes to lines were minor: Michael Mersch skated as an extra on Anze Kopitar’s line, not Nick Shore’s, and Jordan Nolan skated with the defensemen as he continues to work back from his undisclosed ailment. I spoke briefly with Nolan after practice; there’s no change in his day-to-day status.

Darryl Sutter, on keeping Calgary’s shots on goal to the perimeter:
We wanted to play in their zone early as much as we could, just because it’s not so much them, but just because of us. We were trying to keep it really simple and keep our shifts really short. Long trip, and it was really hard on our guys, and you knew there wasn’t going to be much energy last night. If you can get that consistent through our lineup, then we were going to have the puck in their zone a lot, and that’s probably all. I mean, other than the first couple shifts, I think we dominated.

Sutter, on whether Tyler Toffoli’s plus-minus is a reflection of his play, or who he’s with:
Probably all of that. I think that he plays with veteran guys and he plays with guys who are very responsible in Kopitar, Carter, King – guys like that are very responsible guys, which puts the pressure on him to make sure he is. And then from the individual standpoint, he’s a guy that when he’s on his game, he’s not turning pucks over very often, so that translates into being on the right side of the puck and not being in your own zone. [Reporter: What did you want him to do this year, other than just make the normal progression?] Do more. Do more for the whole season. Be more consistent. Obviously he had a great start as he did last year, and I think that last year he dropped off after he was diagnosed with mono, and this year, probably the last six weeks he’s dropped off also. Do more. Be more efficient. [Reporter: Is there something unique about his shot release, or how would you characterize why he’s able to-] I think he can score from a lot of different areas. You can be around the net and score, you can be at 40 feet and score, you can do it on the rush, you can do it off the forecheck, and that usually translates into more shots. You can tell where he’s at always in his game. The plus-minus thing, when you go forward, you’re not paying too much attention to that. He’s got to play against good players, but with him, the more shots, the better player he is on the ice. If he’s not getting shots, it’s pretty easy to pick his games out because he should be [getting shots]. He has the ability to do it, and if he’s not, that’s on him.

Sutter, on plus-minus as a statistic:
It goes through your team. I think if your team is all pluses, and somebody’s a real bad minus, that shows up, and if your team is all right in the middle or a minus, and somebody’s a really high plus, that shows up. That’s where it does make a difference. … Our goals-for and against differential is probably, I don’t know, [plus]-25. I’m not even sure. So there are probably seven or eight teams into those double-digit numbers like that, and that means that you should have plus-players unless you have real high power play numbers or real bad five-on-five numbers. But if you’re really consistent in terms of your structure through your team, and we’ve got that goals-for and against differential, then your players should be plus-players. That’s something we talked about last year at the end of the year lots. We had guys who were high-minus players. That’s on the individuals, because the team was high-plus in terms of goals and against. So if you’ve got a player that’s a double-digit minus, that’s on the player. That means the player’s not pulling his weight.

Sutter, on Connor McDavid:
We’ve only played him once. He’s a high-end player. He’s 18-years-old playing in a men’s league, and his production, if he’d played every game, his production is with the top handful of guys in the league. [Reporter: It’s always whenever one of these guys comes along, like a Crosby or Stamkos, there’s so much anticipation and hype.] I think that this last group, though, well, every year is different because it’s not like the first five guys are all stars every year, or playing in the league, period. So I think this last group, you talk about those handful of guys – it’s not just Connor McDavid – there’s a pretty good group. The lottery teams this last year, they all won.