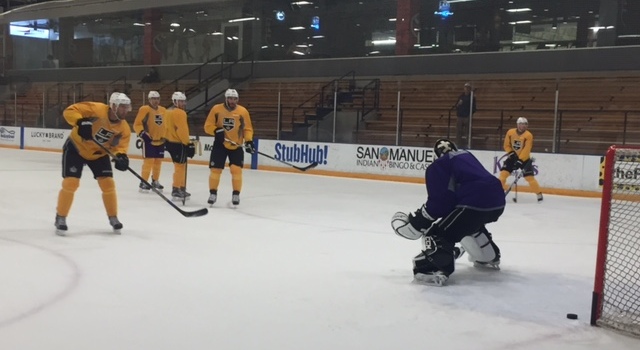 Good morning from El Segundo, Kings fans. The Calgary Flames are in town for their first of two Staples Center affairs and for the second game of the four-game season series. Los Angeles won 4-1 in Calgary on New Year’s Eve in the teams’ only prior meeting.

So, Anze Kopitar could be back in tonight. The Kings aligned as such this morning:

-Jonathan Quick left the ice first. Expect him to start in net against the Flames.

-Jordan Nolan (undisclosed) and Kevin Gravel remained on the ice for extra work with Jhonas Enroth, so Nolan will probably need another day or two, and Gravel is probably out as well. Because Michael Mersch exited the ice much earlier, it’s possible that he could take warm-ups and play if another forward is unable to go. That could be insurance for Anze Kopitar, who skated alongside Milan Lucic and Dustin Brown and appears to be a safe bet to return to the lineup after a one-game absence.

-The Kings will wear their Forum Blue and gold jerseys tonight as they honor Mike Donnelly on the second of three Legends Nights games this season. Darryl Sutter spoke about Legends Nights this morning, and I’ll have his quotes up shortly. If you missed my story on Donnelly, it’s right here.

-As for the Flames, Joni Ortio will start in goal, and Kris Russell isn’t expected to play, according to Roger Millions. Calgary is also without Dennis Wideman, who is serving a 20-game suspension (with a third-party arbitrator hearing an appeal on Thursday) for contact made with linesman Don Henderson on January 27. The Flames have lost four of their last five games.