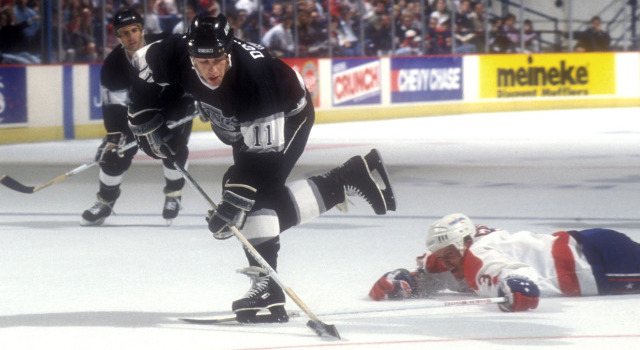 A good morning to you, Insiders. As players are now leaving the ice at the morning skate in advance of tonight’s game against the Calgary Flames (7:30 p.m. / FOX Sports West / KABC 790 / I Heart Radio), here are several links to get you ready for the day.

–CATCHING UP WITH A LEGEND, MIKE DONNELLY Tonight is Mike Donnelly Legends Night, and late last week I caught up with the blazing fast forward who was part checker, part goal scorer, and one of the most enduring and appreciated role players from the 1992-93 Campbell Conference championship team.

“I remember the whole play,” Donnelly said of his tiebreaking, late third period, Game 7 goal at Maple Leaf Gardens. “It was a quick turnover, and we jumped in the play. For a split second, we had a three-on-two. I don’t know if Alex [Zhitnik] saw me, but it looked like he was trying to get the puck to the net or to Tony going to the net, and it hit a skate and it deflected right on my blade, and I had half a net to shoot in. I wasn’t making a mistake there, I was burying it. It was on and off my stick so fast, but it was just a quick chance. And that’s the thing back then – there was so much skill on the ice, there were a lot of chances. It was fun. It was wide open, but it was physical. There was tight checking at times, but there were chances out there. For sure it was a lucky bounce on the way that the puck came to my stick. I have a big smile on my face when I think about that play. It was awesome.”

If you missed the link earlier, my story on Donnelly is up at LAKings.com.

–30 THOUGHTS Almost right off the hop, Elliotte Friedman’s weekly movers and shakers column notes how Marian Gaborik’s injury actually creates financial flexibility for the team, should (when) the club decide(s) to put him on long-term injured reserve. It’s similar with the situation involving Patrick Kane and the Chicago Blackhawks late last season.

1. Last year, Patrick Kane missed the final 21 games of the regular season, returning for Game 1 of the playoffs.

No one’s doubting his injury, but it was a marvelous manipulation of the salary cap for post-season purposes. There is no limit after Game 82. Chicago could play Kane, newly acquired Antoine Vermette and everyone else without hassle — although opponents weren’t thrilled with the loophole. Now, we’re going to see who copies it in 2016.

Number one on the list is Los Angeles, which won’t have Marian Gaborik for awhile. The Kings were already looking at defencemen, but the winger’s injury adds the possibility of a forward, too. No surprise if they do it, because, as an opposing exec says, “When Dean (Lombardi) has the opening, he goes for it.” (No one quoted in the blog is an anonymous source.) The Rangers would be another, if Rick Nash needs more time.

Friedman also spoke with St. Louis general manager Doug Armstrong, who said of Jonathan Quick, “Whenever we play LA, he’s a superstar. You’re almost surprised you beat him. He’s always so competitive, so athletic. He’s one of my favourite players to watch.”

–TEAMS THAT CAN BE AGGRESSIVE AT THE DEADLINE Surprise! The Kings are one, and Craig Custance also notes that he’d “expect” them to be in on Mikkel Boedker. The link above is for ESPN Insiders ($), but there’s this snippet:

The belief outside the organization is that the Kings would be willing to move prospect Adrian Kempe, the No. 1 prospect in their system, according to ESPN Insider prospect guru Corey Pronman.

If the Kings end up passing on the high prices it would take to acquire a higher-end forward, Edmonton’s Teddy Purcell has appeal. There’s familiarity there, with him having played 91 games with Los Angeles, and Purcell has shown the ability to play up and down a lineup effectively.