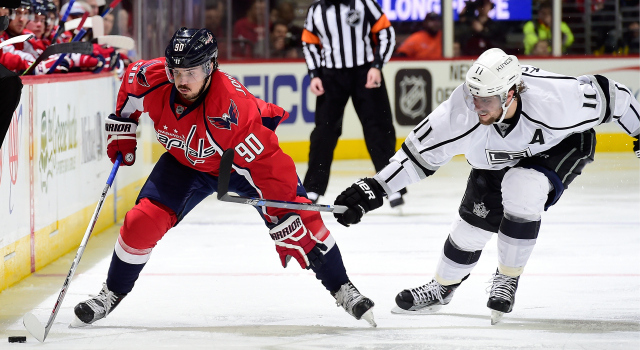 Anze Kopitar is tremendously durable – he holds a club record with 330 consecutive games played – and has rarely found himself in the position he was in on Saturday, when he watched Los Angeles’ win over Nashville from the dressing room instead of playing in it.

“It was awful. I was definitely more nervous watching than I was ever playing,” he said. “It’s a bunch of time that you waste for literally nothing, so I don’t want to be in that position too often.”

Fortunately, he shouldn’t have to be. Sidelined since the first period of Thursday’s 2-1 overtime loss to St. Louis with a lower-body injury, Kopitar remains day-to-day. He participated in a full practice with the Kings on Monday but during line rushes skated as an extra alongside fellow day-to-day forward Jordan Nolan, who didn’t play against the Predators, either. Neither player is expected to be out for any extended period of time.

Asked whether his ailment came from ongoing wear-and-tear or one particular in-game incident, Kopitar confirmed the latter.

“No, it was just the one incident, really,” he said. “I felt good before the game [against the Blues], it just tightened up on me, and that was it. I didn’t have enough strength where I thought I could be effective on the ice, so at that point, being thrown into a position where you’re depended on, and if that would have bothered me and I wouldn’t be able to help the team in certain situations, for me that’s hurting the team. I didn’t think it made sense just from my perspective, and the medical guys made sure that the word came across that if it’s not there, to not push it because we still have some time to heal and to make it better and go from there.”

Had the Kings been playing in late April, May or June, the star center probably would’ve gutted it out. But in late February, and with the schedule offering an extra day of recovery with Sunday’s day off, the decision wasn’t a hard one to make.

“I would have definitely tried [to play if it was a playoff game], very likely that I would have been in,” Kopitar said. “But, just right now, being still a little bit of time until April, it was best for me to take the rest and get back to 100%.”

“It literally is one of those where it is like day-to-day, so I’ve been progressively feeling better, and then we’ll just see where that takes me.”

Anze Kopitar, on his game against the New York Rangers:
To be quite honest with you, I felt terrible before the game, flat-out terrible, and then obviously the goal in the first minute helps, everything was just a snowball effect. I did not feel great before the game. [Reporter: Like the flu?] No, just a little bit of everything. It was cold outside and everything, it was just one of those things where you sometimes don’t feel right, and I didn’t feel right that game, but it turned out pretty well.

Kopitar, on the team defeating Nashville despite missing several forwards:
You remember the game that I played about five full minutes in St. Louis, I thought it was a gutsy effort and we just came up a little bit short in OT, and Saturday it was just very awesome to see how the guys battled. Obviously I don’t want to be in that position too often, but it’s going back to the guys knowing it’s a huge game, and we actually made the trip halfway decent with that win. They dug deep and literally threw everything, left everything there at the end and we got the two points.

Kopitar, on the lack of excuses during the road trip:
Yeah we just didn’t have any other choice, obviously the Boston game was one of the weirdest games that I’ve been a part of, it just didn’t, it just didn’t – the one period in Brooklyn was just flat out terrible, then we came back with another good one at MSG. And then the next two against the Devils and the Capitals, we were there, we were playing good hockey, we just couldn’t score. So, those two, I feel like they could have gone either way, and obviously St. Louis was a hard-fought game, and a big win on Saturday. I guess what I’m trying to say is the trip could have easily gone 5-2, but again, it was a good trip, but now we have to make sure that we take care of business here at home.

Kopitar, on the Kings’ recent penalty killing, including the 5-on-3 kill in St. Louis:
First and foremost, we’re taking too many penalties, that’s the bottom line, and we’re putting ourselves in that position. But yeah, our PK came up huge, yeah we gave up the one in Nashville too, but there were plenty of penalties to kill, which the guys did a really good job.