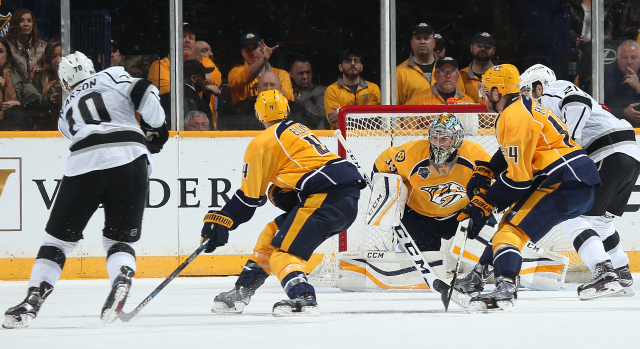 If the Los Angeles Kings were to end the road trip with a win, Saturday’s game, minus the penalty trouble, was pretty much the exact script and endgame they’d have to execute. Minus Anze Kopitar, minus Marian Gaborik, and facing yet another team in playoff position – one whose overtime struggles has well eclipsed those of last year’s Kings – a 2-1 overtime win in which Jonathan Quick was the team’s best player was the most likely way out, if not the easiest. Though there wasn’t any real semblance of a sustained attack until the third period, this was exactly the type of game L.A. was looking to play, and other than some penalties away from their own net that spurred excess time on the kill, they effectively shut down Nashville’s top players until a flurry of activity near Quick over the final five minutes of the game and denied any excess of looks from the Roman Josi-Shea Weber pairing while the Preds were on the power play. It resulted in a character win, which pushed the team to a salvaged 3-3-1 trip in the most murderers row-like portion of the schedule, a stretch in which they were without several of their most important players.

Tanner Pearson has now gone six and a half weeks without a five-on-five point, but on Saturday night provided among the most important goals for the team this season – as he did two Fridays ago against the New York Rangers – when he scored in overtime by cutting to the top of the left circle after all three Nashville skaters backed off following the transition from Martinez. It wasn’t as if Martinez made some elite play to get the puck into Pearson’s hands; he dished the puck to his right, and Pearson hit the net with an accurate shot. But in speaking with those in the coaching staff and hockey ops before the season, Martinez’s skill set was expected to be of very good value to the team in New Overtime, and in a game in which they didn’t have two-thirds of the line they generally open the extra session with, the fleet-of-foot defenseman earned his second assist and third three-on-three point and continued to provide a poised, mistake free presence whose abilities are accentuated on the open ice.

Playing .500 hockey doesn’t get teams into the playoffs, but Saturday’s win did help salvage a trip that presented significant challenges in both competition as well as personnel. All games, other than the Boston and New York Islanders games, could’ve gone either way, so a 3-3-1 road record against six teams that currently occupy a playoff spot and one additional team (New Jersey) that was in a playoff spot at the time of the game isn’t cause for any widespread panic. That Los Angeles claimed three of a possible four points against their Western Conference foes at the tail end of the trip and without the services of Anze Kopitar for five of six periods (and Marian Gaborik for all six periods) is an admirable conclusion. And though travel demands ease up – the Kings don’t leave Southern California for nine straight games, eight of which will be played at Staples Center, and embark on only one road trip longer than two games – having a healthy Kopitar return to the lineup quickly is paramount (even if his health through the springtime is still most important). The balance and structure of the lineup without him precipitates games like last night’s, in which the Kings are forced to check extremely well and rely on an outstanding Jonathan Quick; fortunately, since his own return against Washington, the world class goaltender has been the team’s strongest asset, along with Drew Doughty, who once again broke up a two-on-one with a desperate lunge in the narrow win. As long as Los Angeles has Doughty, Quick and Kopitar they’re capable of winning in both a micro and macro sense; that they were able to gain two points with two-thirds of their trinity available reflected a gutsy effort. 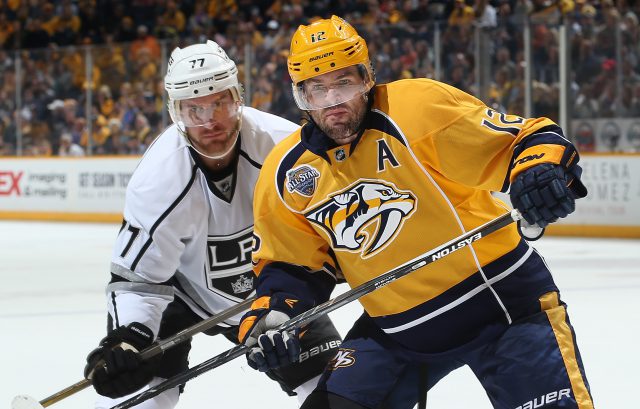