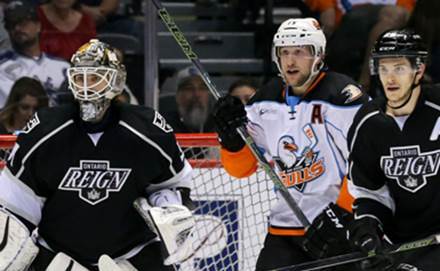 Reign game breakdown
A shorthanded Reign squad battled down to the wire in San Diego in a 4-2 losing effort where the difference was a Matt Berry go-ahead goal with 4:18 left in regulation. Ontario came in a bit bumped up with Adrian Kempe (upper body) and Paul Bissonnette (mid-range) both injured the night before against Texas. It was already planned to send Zach Leslie and Scott Sabourin to Manchester for conditioning, so they were both out. Add in Michael Mersch’s recall to the Kings and Kempe in the lineup, but only as an emergency to serve penalties, and the Reign (30-14-3-1) had just 17 skaters going against the Gulls (25-20-1-1). Each time one team took the lead, the other would strike literally seconds later. San Diego’s Brandon Montour opened the scoring at 15:37 of the second period, surprising goalie Peter Budaj with a high shot from inside the right circle. But Kevin Raine, moved up to play forward due to the above circumstances, tied things just 17 seconds later, burying the puck after it was sent to the net by Christian Ehrhoff. Just 1:40 into the third the Reign took their first lead of the game on a blast from the point by Nick Ebert, also his first of the season. Just like it was in the second, an equalizer was scored quickly thereafter, 22 seconds later by Joseph Cramarossa. That paved the way for Berry’s game-winner off a defensive breakdown and bobbled puck by Ebert. Ontario worked 6-on-5 with Budaj pulled but an empty-netter for Mike Sgarbossa sealed San Diego’s win with 39 seconds left. Budaj finished with 26 saves and Anton Khudobin earned the win with 30. Sean Backman was injured late in the game and head coach Mike Stothers said there’d be a better idea of his injury next week.

Best quote
Gulls head coach Dallas Eakins, on the game’s feel: “I know it’s February, but that was a playoff game. That’s how playoff hockey is in this league.”

Three stars
–Matt Berry – After hitting a post earlier in the game, Berry made due late in the game for the winner. Berry came in on the forecheck and stole a bouncing puck from Ebert in the slot and got his shot off quickly and past Budaj. It was just his third of the season in 12 games played.
–Kevin Raine – Called into a forward role, the Dryden, Ontario, native showed his versatility in netting his first goal of the season. Very early in the season it was common to see Raine in line rushes at practice with the forwards, but since it’s been all D. But he fit right in around the offensive net for his first goal. Andrew Crescenzi won an end zone faceoff and Ehrhoff sent the puck on net and after a whack by Crescenzi the puck was left for Raine to bury at the right of Khudobin.
–Anton Khudobin – The Gulls goalie kept the Reign scoreless on four power play attempts and won his third straight game. Like Budaj for the Reign, his NHL experience has been a boost for the Gulls, particularly in February where he improved to 5-1. Khudobin stopped a Nic Dowd backhanded attempt late with Budaj pulled and then the Gulls scored the empty-netter to make it 4-2.

Turning point
Just as the Reign had finished killing a Kurtis MacDermid holding penalty in the third, they changed skaters but were caught scrambling in their own end and Berry struck 35 seconds later. On the defensive breakdown on Berry’s goal the Reign could not clear the zone and Jordan Samuels-Thomas broke his stick. Ebert grabbed possession but he lost the puck and dropped his stick, leaving it for Berry.

Stat fact
–5 – Shots on goal for Ryan Horvat, a tied for game-high and a new season-high for the Reign’s fourth-line center.

This and that off-ice
Mersch had 7:11 of even strength ice time in the Kings’ 2-1 overtime win against Nashville on Saturday. Mersch, who did not play for the Reign on Friday and was officially recalled by Los Angeles on Saturday morning, had two shots on goal and two hits. … Defenseman Kevin Gravel, still up with the Kings, was a healthy scratch for a second straight game. … Leslie and Sabourin played in Manchester’s 4-3 loss to Reading on Saturday. Leslie registered a goal and both players each had 3 SOG.

Next up
The Reign will have a recovery day tomorrow and then three days worth of practice where it’s expected that the Kings’ development staff take over Tuesday and Wednesday. The team will leave Thursday for Texas as they face the Stars in a back-to-back on Friday (7:30 p.m.) and Saturday (7 p.m.).