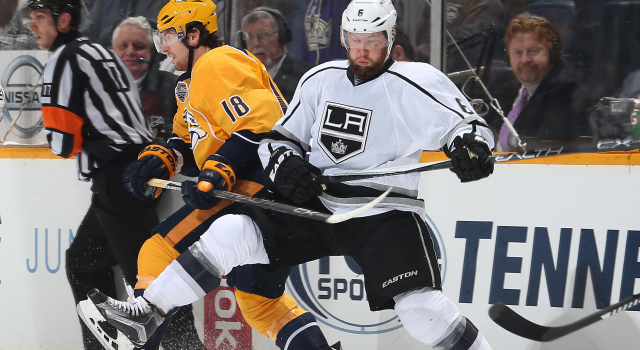 Milan Lucic, on the long road trip:
Yeah, it was a long road trip. It’s nice to finish it off with a win to get to .500 on the road trip. I think we left a couple points on the table if you look at the road trip as a whole. Not being able to capitalize on chances and get go ahead goals, but as a whole we competed really hard in all the seven games. You take away the first period against the Islanders and it’s a pretty good road trip as far as the competitiveness goes. Today, they pushed us hard, they’re a really good hockey team and it’s just nice that we were able to get a big win here tonight.

Lucic, on not having Anze Kopitar and taking penalties:
It seemed to be a theme on this road trip. We definitely didn’t do ourselves much of a favor by taking all the penalties that we did on this road trip, and especially tonight. If you look at this game as whole you have to credit our penalty kill and Quickie who was probably our best penalty killer out there. Sometimes that’s what it takes to win, a good penalty kill and it was able to get the job done tonight.

Tanner Pearson, on overtime success:
We’ve been good in OT all year, it was just another hard fought win and last one to finish off the road trip.

Pearson, on Jonathan Quick’s performance:
We get to watch that on a pretty regular basis. That’s just Quicky doing his thing and he came up big for us today to finish up the road trip.

Pearson, on his overtime game-winner:
I knew Carts and Dewy were on for a while so I wanted to just hold it and get a change. The key thing is to have possession in OT as much as possible. We were able to do that, create a chance up the ice. Shoresy drove the net pretty well and pushed the d-man back and I was able to get a shot off.

Pearson, on whether the Kings consider Nashville’s overtime struggles:
No, both teams are trying to win. We knew what that was like last year, we weren’t that great in overtime or the shootout so this year is a different story. We are doing a good job with it so far.

Pearson, on playing without Anze Kopitar and being shorthanded often:
We took more penalties than we wanted to. With him out of the lineup, our whole lineup played well as a group today and it showed for the long run. We were able to get the win and finish off the road trip.

Pearson, on the importance of the win:
We needed that to finish .500. It was a long trip but it was a need to win too.

Jake Muzzin, on Tanner Pearson’s overtime success:
I don’t know, but I like it. He’s got a great release, a great shot. In New York it was kind of a similar rush play with a quick release and he scored. We need guys stepping up in different situations, and in overtime he has kind of found his thing there, so that’s good for us.

Muzzin, on his goal:
It was just a faceoff win, I walked across the blue line and just trying to get the puck to the net and it went in. Guys did a great job getting in front, causing some screens and havoc there and it just found its way in.

Muzzin, on the penalty kill:
We have been taking too many penalties, especially early on in games and giving teams momentum and it’s kind of dug us a little hole on this trip. We gave up one again in the first, but throughout the game we did a pretty good job on the penalty kill.

Muzzin, on whether he considered the Predators’ struggles in overtime:
No, I had no idea. We worry about us trying to win, I had no idea about that.

Muzzin, on winning the final game of the trip:
It was a good effort by everyone tonight. We knew going in it hasn’t been the best road trip for us and we wanted at least to keep it around .500. Everyone dug down deep tonight and we got the win so it was huge.