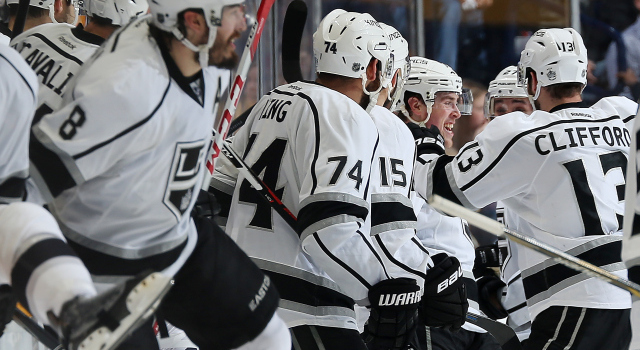 On the penalty killing effort:
Well, they scored their goal on the power play at the end of the first period. We weren’t perfect.

On Tanner Pearson’s game-winning goal:
Somebody had to score for us.

On the importance of staying composed with a surplus of penalties:
Well, you don’t want to take that many penalties. But the one they scored on at first was a too many men, and the young fellow we called up was a little anxious jumping on the ice, so chalk that one up to a rookie mistake. But the composure part of it, I mean, hey, the penaltie’s usually two minutes. Put it on the clock, try and get a kill. It’s hard against a team with their back end, with Josi and Weber. I think between them they have 17 power play goals, maybe, between themselves. I think with the addition of Johansen, it gives them another weapon there.

On Jonathan Quick’s performance:
I’ve said it lots and lots. Jonathan doesn’t get enough credit for what he does. Pick a goalie in a big game, I’ll take Jonathan Quick.