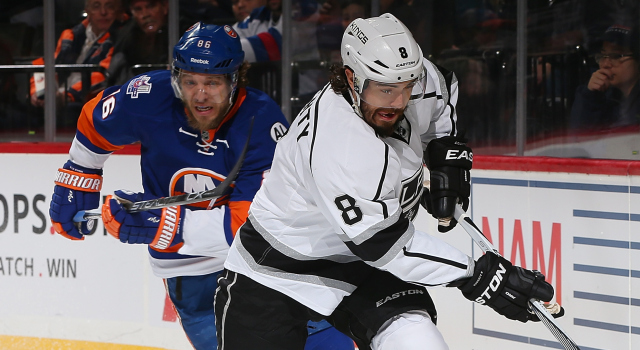 On how he is holding up at the end of this trip:
I’m holding up well, obviously it’s been a frustrating trip for us. We should have more wins under our belt, but we don’t so that part is frustrating. Feeling good physically, we have had lots of days off between games where Darryl hasn’t made us skate, so we are able to regroup and get our legs back.

On the teams play:
I am seeing things that we need to clean up. We need to score more, that’s definitely apparent. Defensively both the forwards and defense are playing decent, but I see little lapses in our game where Quickie has to come up with a breakaway save or 2-on-1 save or big saves like that. When we are dominating other teams we shouldn’t allow those things to come back and get good chances that way. We can’t have those little lapses and have to make Quickie make big saves, I think that’s the problem right now.

On Nashville’s style of play:
They play good two-way hockey, all their players do. Their defense is one of their strong suits, along with their goaltending. That’s going to be one of our keys to success is getting on their defense, having our forwards hit them as much as possible, making them go back and break pucks out; getting to the goalie too, getting in front of him. Pekka is an unbelievable goalie and he is tough to get by when he is seeing pucks, so we need to get bodies in front, deflections and stuff like that.

On how he recovered from his career-high in minutes:
Maybe just a little extra work on the massage table, so I guess it’s not really me doing anything except for laying there. I definitely got a little extra work from Tommy in the room, and just doing a lot of stretching. My legs feel good, I felt great the other night. When I keep my shifts short it’s not an issue for me, it doesn’t matter how many minutes I play, but I definitely got a lot of rest yesterday. (Reporter asked if he will play 37 minutes tonight) No, I think we will be going back into the 20’s tonight. I feel good, and Darryl gives us the time off between games and that helps a lot.

On if he heard anything about how many minutes he played from friends:
I did have some more texts than normal after the game with people commenting on how many minutes I played. I really don’t know what to say back to it, I felt good and I was happy to do it. I realize I can’t be doing that every night.

On playing without Kopitar:
Well without Kopi in the lineup we are not the same team, that’s an obvious answer. We have other guys, we called up Mersch who is a great player, we have other guys that now get a bigger opportunity to play more minutes and show their stuff. When guys get those opportunities they usually relish in that and perform well. That’s what I am looking for guys like Shoresy and Andy to do tonight. They’re going to play more minutes tonight and they are going to have big games in my opinion.

On Roman Josi:
He’s smart, a smart hockey player. He is good offensively, good defensively, I really like watching him play. Him and Weber are probably one of the best defensive pairs in the league without a doubt. They are such different players though, Josi sees the ice well, skates well, has good hands; he really has all the tools. We have to hit him hard tonight and not let him skate the puck up and down the ice.

Michael Mersch:
On how he can stay with the team:
First of all I want to show them that I went down and worked on the things they wanted me to work on. Just focus on those things and hopefully the rest of the game will come.

On if he feels like he was able to accomplish some of those things in Ontario:
Yeah for sure. It was great to grasp the systems while I was up here, the little things they do up here and go and implement them in my game down there. I worked on a few things and tweaked a few things myself without anyone really telling me what to do. You are kind of teaching yourself a little bit too.

On Mike Stothers’ quote about Mersch listening to him:
He texted me that. He’s good at being personable with his players, but at the same time he can lay the law down, that’s one thing that’s special about him. I texted him good luck, because it was a big game against Texas, second place in the Conference. He said back ‘you’ve listened to me, now go listen to them and I won’t be mad at you,’ something along those lines. He gave me a good laugh, he always does.

On Budaj’s game against the Rangers:
I was pumped for him. He has done so much for Ontario. We are really good defensively, it’s the same system as up here, same mentality. When you have a great goaltender like that who is getting a lot of wins for you and comes up here and wins it’s great. In St. John’s he had a rough go. For him to come around this year, his first game in Ontario he got a shutout win. It’s a complete 180 from what he went through last year. I have been really happy for him because he is a great guy. He’s a father, a husband so he is a really good role model for us on the team.

On this not being his first recall and his comfort ability with being back:
It’s good, I kind of know what is going on, not asking as many questions this time around. Having Kevin Gravel as a roommate, he’s my roommate in Ontario, we live together. It’s just the little things like not asking what the dress code is, how the pre-game skate works.

On how Darryl treats him when he comes up, if he says anything to him sepcifically:
He just addresses the team. I am just one part of the team. Whatever I can do to help out, maybe you give a little life to the locker room, they’ve been on the road a long time so you spend a lot of time together. Maybe seeing a new face around makes things a little fresher and hopefully we can end this trip on a high note.