The balance of effort and performance with results 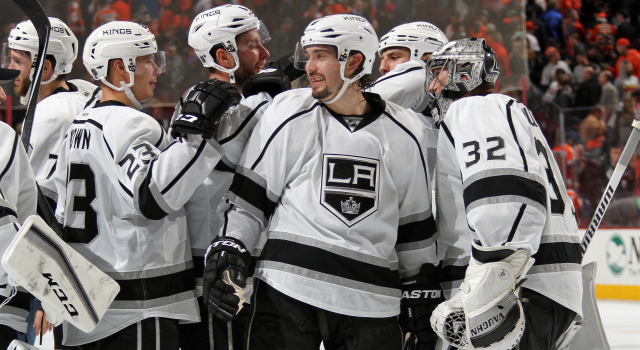 After scoring 16 times in the first three games of the road trip, the Kings haven’t scored an even strength goal over the last three games and have instead relied upon a shorthanded goal and a power play goal in gaining one point out of games against the Devils, Capitals and Blues.

While the team appears to be playing fine from standpoints of emotion, systems-play and effort, they’re just not burying the puck right now and have scored only twice on their last 100 shots. It’s a balance that Dustin Brown acknowledged while also admitting that he’s irked by the current offensive drain.

“I mean, obviously it’s a positive to get one point, weather the storm, but we had chances to win that in regulation,” Brown said of Thursday’s 2-1 overtime loss. “For lack of a better term, it pisses me off that we weren’t able to capitalize on those chances. I mean, that’s been story the last few games. Eventually people need to get mad or upset about not finding ways to score goals. We have chances all throughout the game to make differences, and it’s just bearing down on those chances, eventually you need to quit talk about bearing down and put the puck in the net. To get one point is huge, especially considering the circumstances of the game, but our motivation – we need two points now.”

Jonathan Quick is very end result-oriented, and he acknowledged that while the team dug deep to get one point on the road in St. Louis after having killed an extended third period five-on-three, the focus remains on winning.

“Obviously it took a big effort from a lot of guys to get that one point,” he said. “Obviously we went there to get two and we didn’t. We’ve got to get two tomorrow, that’s the whole focus now.”

Dustin Brown, on the team’s focus should Anze Kopitar be unavailable:
I mean he’s our best player, so it’s a big loss for us. And saying that, it’s a big opportunity for other guys to elevate, and for other guys to step into the lineup and have an impact. That’s the good thing about a team sport, you have other guys that you can rely on. I don’t know the extent of his injury and all that, but these are the times where you really kind of find out what you’re made of.

Brown, on playing two-thirds of the game without Kopitar:
We lost him pretty early, I think he had five minutes of ice. It will probably be, going into next game if he’s not able to play, at least we have that extra guy in the lineup. It’s tough to lose a guy that early in the game, we had to do it with Gabby in New York, the rhythm of the bench, because you’re essentially losing a player for the whole game, but again, we’ll move forward.

Brown, on whether the team’s play evolves at all when Kopitar is unavailable:
I don’t think you change, I think in the back of your head, again, what it comes down to is there’s guys having the opportunity to make a bigger impact than maybe they normally would. Probably the other side of it is guys who are go-to guys elevate their game as well, understand that there’s not more because everyone gives what they’ve got, but like when a big guy goes down you kind of have to do it collectively. Everyone’s playing to the best of their abilities, but when a bigger guy goes down like that, you’ve got to find a little extra somewhere. It’s different responsibilities, different matchups, especially when you have a player of Kopi’s magnitude out of the lineup. We had to do it our first game in St. Louis too, he was lost in the first period last time.

Brown, on Brian Elliott’s save on Milan Lucic in overtime:
I thought it was a good play. Stuff like that, when a goalie makes big saves like that, sometimes you just have to tip your hat. He made a good save at the right time. How many saves has Quickie made like that? So, exactly.

Jonathan Quick, on whether there were questionable calls Thursday night:
Yeah I think there were a few that probably should have gone differently in the first, and they knew that, so I don’t know if maybe, usually it comes back or whatever, sometimes they give it back to you, so I don’t know if that was that. It’s a fast game, there’s a lot happening, it’s not easy for them to make calls. Obviously as a player you’re emotionally invested in the game, things happen and you see it a completely different way, sometimes emotions kind of get involved, and that’s the way it works.

Quick, on killing off the 5-on-3 and whether it helped momentum:
Absolutely. You look at the five guys they had on the ice, and how talented, the chances they were able to create and how we were able to take away was pretty remarkable, I think they only ended up with one shot on pretty much a full two minutes on a 5-on-3. We won a couple big draws and we were able to kill some time making them break out of their own end, and then taking away the right lanes while they were in our end, so that was huge. When we kill that off late in a game in the type of game we’re in, you get that feeling like ‘there’s no way we’re going to lose now’. That was a huge two minutes for our team. [Reporter: And no number 11.] Yeah, he probably would have been out there for most of that PK, it was a big effort from the guys. Drew, he did the full two, those are tough minutes.

Quick, on Doughty playing 35 minutes Thursday:
You can’t say enough about what he brings to this team, the minutes he plays day after day. He’s obviously a special player for a reason, so I’m glad he’s on our team.

Quick, on how he’s feeling after suffering an injury earlier on the trip:
I feel good, obviously I was hoping to come back sooner. I hate watching games, you always want to be part of it, so you know, it’s obviously tough watching them play. It’s good to kind of get back in there and play some games, but they’re both losing efforts, you can’t just play, you’ve got to prepare to win.