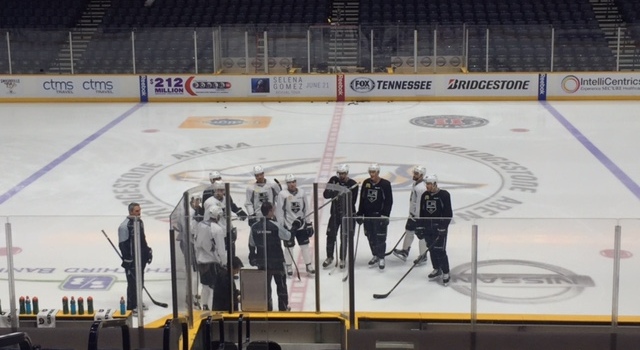 The Kings took the ice at 1:30 p.m. for an optional practice at Bridgestone Arena this afternoon in advance of tomorrow’s game against the Nashville Predators. Anze Kopitar didn’t skate, though he was present at the arena as he received treatment.

Country singer Gord Bamford, an Australian who was raised in Alberta and is a friend of Darryl Sutter’s, was present at today’s practice, and his son took the ice with the players at the end of the skate.

Other than that, there weren’t any other real on-ice notes – there were no line rushes or alignment details to share – as the team’s top-minutes players mostly remained off skates 12 days into a 13-day trip. I’ll share some Jonathan Quick and Dustin Brown sentiments shortly. There are some interesting takes there, as well as the opinions below from Sutter on the team’s performance last night.

Darryl Sutter, on the effort of the players to “dig deep” without Anze Kopitar:
We did it in St. Louis last time, too. I think that the adjustment is those guys going into play the position. We’re lucky to have guys like Trevor Lewis who could do it. Two guys didn’t play. We didn’t play 12, so one of ‘em went out and two of ‘em didn’t play.

Sutter, on the team “battling hard” and “playing well” on the trip:
We have and we will. That’s the bottom line. We’ve got one more and go from there.

Sutter, on the end result of last night’s game:
I think that’s a heavy game. It’s not for the faint of heart. Hey, they’re a team that plays really well at home and they have really good starts and they did, and the only thing I didn’t like was the two penalties we took behind the goal line in the first period. I didn’t like the call on Quick. That’s a bad call. That’s what I told those referees. Our goalie’s been run over in the Boston game. Even though it’s not a penalty, the goalie gets run over. The Washington game, the goalie gets run over, last night a couple times, and then you guys call – print this – chicken____ stuff like that. I’m sure Jonathan Quick was trying to trip him. [sarcasm]. It’s hockey, not basketball. And they scored on it. You know what? It’s a big difference in the game. It’s a one-nothing game, and something we’ve been talking about, hey, it’s really difficult. All these buildings we’ve played in on this trip are really, really tough buildings, if you look at it. And the importance of a good first period, it doesn’t always mean you win the first period in terms of the score, but have good first periods, and then situations like that come into it, it makes it a little bit more difficult. I thought we had a great second period, and quite honest, our penalty killing was really, really good in the first period, too. I thought we were really good in the second period and we played our guts out in the third and damn near got it. Even in overtime, you think how much makes a difference, or the style that we play in overtime, it’s one of the few times all year where even though it’s after a great chance – Brownie and Looch – one of the things you do, you have to make the goalie make a save, and you can’t turn the puck over in the O-zone. So that’s how they got a breakaway and scored. That’s one of the things we don’t do, and it happened.