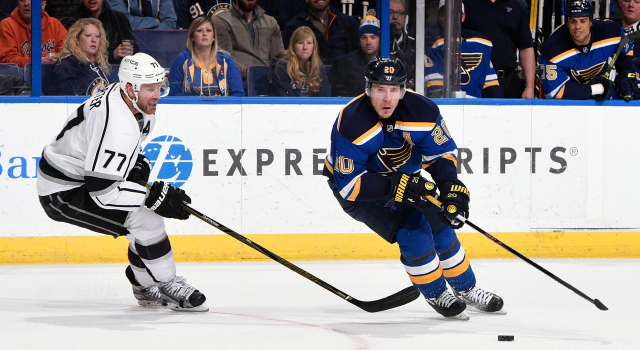 Jeff Carter, on getting one point:
We’ll take the point now. We battled hard, going down and losing Kopi early, guys stepped up. At the end of the day we have to start winning some games. We have lost all of our room now. We have to start scoring goals, we are struggling there right now. Quickie is holding us in games, we have to help him out there a little bit.

Carter, on the playoff atmosphere:
To be honest with you, pretty much every game we play against these guys are like that. They are a big heavy team and they come at you hard. Playing in these types of games brings the best out of us, but if you don’t score any goals it’s tough to win in this league and Quickie is giving us a chance right now.

Carter, on Doughty’s career-high in minutes:
He just goes and goes and goes and it’s pretty amazing what he can do out there. I asked him after the game if he was tired and he said no, he felt great. That’s just him, he loves playing and the more he plays the better he is and he has come up big for us time and time again when we need him.

Toffoli, on the overtime game-winning goal:
Vinny tried to freeze the goalie and it hit something and Schwartz is a really good skater. He made a really good play.

Toffoli, on the five-on-three kill:
That gave us a lot of momentum. Carts, Lewy, Dewy, Muzz, Alec, whoever was out there, they did great job. They have some really dangerous players dangerous weapons over there, they (Kings penalty killers) did a great job, and Quickie made some big saves when we needed him.

Toffoli, on his goal:
It’s good, but it’s not enough at the end of the day. We are at a point in the season where we need every point, and we needed two points and we didn’t get it tonight.

Drew Doughty, on the game’s intensity:
It was a fun hockey game to be a part of. Obviously not the outcome we wanted, but that was a man’s game out there tonight. It was a hard-fought game, both teams playing hard. Those are the types of games the Kings like to be in, and we need to come out on top of those. We’re sick of losing right now, we have to get off of this losing streak right now. Teams are right behind us and we want to come first in our division and right now it’s not looking like we are going to do that, so we need to get on a winning streak.

Doughty, on special teams:
You could say that our power-play kind of failed us in a way, we have to capitalize on one of those chances. We maybe had some good shots, and Elliott maybe came up with some big saves, but bottom line we didn’t get it by him. Quickie played great tonight and the PK was awesome, we gave up the goal in the first on the PK, but after that we got back to what we know and it was good.

Doughty, on his feeling after the game was tied:
I felt like we were winning that game, I thought there was no way we were losing that game. It seemed like we kind of dominated the second and third period, but we had little lapses that created a good chance for them. We made Quickie make too many big saves, whether it was breakaways or 2-on-1’s, whatever it may be, we can’t be having that, when we are dominating the play we need to make sure we have men back still and not allow odd-man rushes.