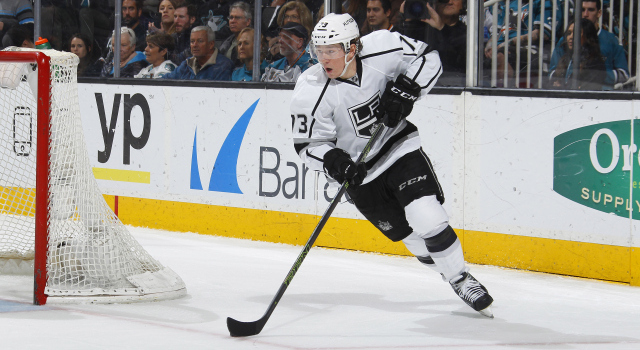 On the difficulties being this late into a trip:
You just have to find a way. You have to keep things simple. Being on the road this long, things get tough but you have to find a way. We have to dig deep throughout our room, find a way to get all four lines rolling, all six defensemen going, help Quickie out and score some goals.

On how he is feeling:
I feel good, we are ready to go. We know we have to bounce back after what happened last game and we can’t think about. We just have to find our game and get rolling.

On the physical and mental challenges of the trip:
We haven’t had to travel a whole lot; being in New York a lot of the time and New Jersey is right there, so travel-wise it hasn’t been too bad, but it’s tough when you are playing so many games on the road and sleeping in different beds. That doesn’t matter, we are playing hockey and we don’t want to worry about all the other things that come along with the game. That’s why we play it, that’s why we love it, and we have to win some games.

On his scoring drought:
I want to score goals obviously, but right now as a team we want to win games. However that happens, whoever is scoring goals that’s all that really matters. It sounds cliche, but that’s how we all feel in the room right now.

On scoring the dirty goal:
You just have to go to the net, put your head down and shoot the puck, get rebounds and just dig away. Tonight is going to be a great test for us, a team like this is going to make us do that. Playing against teams in the East, it’s a little more up and down, where as we come into St. Louis here they play similar to us and we just have to put our heads down, shoot the puck and get to the net.

On importance of turning things around tonight:
That’s what we expect out of each other tonight, is to get to the net, keep each other accountable and score big goals at the right time and win the game.

On the up and down play during the trip:
I don’t think we have been thrilled with the way we have been playing, with the wins even. New York was a really big win for us, but we have to get a stretch going and be confident in our game and just play the right way.

On getting back into the lineup:
It’s just getting yourself back into it and keeping the game as simple as possible, especially in the first few shifts; getting that first hit again, that first pass. The coaches here and the trainers do a great job of making sure when you are out of the lineup you are staying ready and putting the work in on and off the ice to make sure whenever your name is called you are ready to go again. I am ready.

On getting used to being in and out of the lineup:
It’s something that I have kind of become used to over the last two years here. It’s nothing new to me, I understand everything that goes on. I do everything I can with the coaches on and off the ice to make sure I am ready to go once my name is called and that’s all you can do.