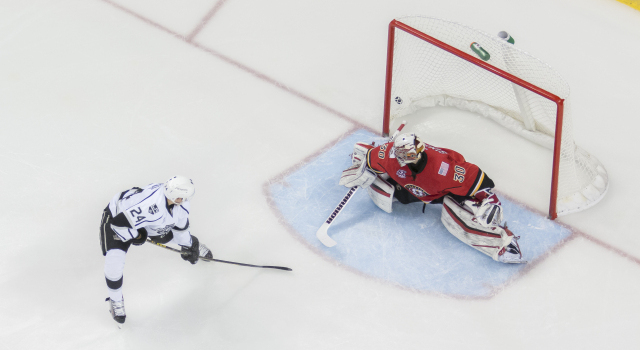 Reign game breakdown
Andrew Crescenzi had a goal and two assists and Sean Backman had two goals as the Reign sliced through their three-game skid with one of their best offensive performances of the season in a 6-1 victory over the visiting Stockton Heat (20-20-1-2) on Wednesday night. Peter Budaj returned to the Reign net after a stint with the Kings, stopping 20 shots for his 27th win. The Reign were unable to win without Budaj, but he didn’t have to be the difference tonight. Instead, the Reign (29-13-3-1) showed balanced scoring, something the could not in three straight defeats where they posted just just four goals. Valentin Zykov opened the scoring at 11:37 of the first period but the Reign gave up a shorthanded goal with less than 30 seconds left in the first period to Drew Shore. Ontario answered with a breakaway goal by Michael Mersch to start the second. From there, they rattled off four more unanswered goals, chasing Heat starter Kevin Poulin early in the third period.

Best quote
Reign head coach Mike Stothers, on Mersch’s speed on his breakaway goal (speed is one of the things the Kings have asked Mersch to work on): “Big Mike’s goal, did you see him pulling away with that great breakaway speed of his? Want that duly noted: There was some great speed by shown by Michael Mersch.”

Three stars
–Andrew Crescenzi – The center had his first three-point night of the season and his first points in a month. He set up each of his linemates (Valentin Zykov and Jordan Samuels-Thomas) and scored a goal of his own 2:13 into the second period to put the Reign up 3-1. Crescenzi had the Heat distracted after he hit Pat Sieloff behind the Heat net sending the defenseman to the ice. Crescenzi curled around the net and Paul Bissonnette found him wide open to Poulin’s right.
–The third line — It’s not many hockey games that the third line for any team takes over the game. Every member of Crescenzi’s line scored and in total the line notched five points. Crescenzi was on the right boards in the offensive zone when he hit Zykov in the slot for the game’s first goal as the Russian put the puck over Poulin’s glove. The opening marker was a big one, as the Reign had not scored first in their last four games. Samuels-Thomas’ 8th of the year was a one-timer from the slot from Crescenzi that beat Poulin five hole with just 26 seconds left in the second. Crescenzi said after the game that his line plays a heavy game and doesn’t do much tic-tac-toe, but they showed some flair and carried the weight of a top line against Stockton.
–Sean Backman — The veteran right winger was the beneficiary of the two highlight reel assists, but he still had to finish them, a task the Reign struggled with dearly in the skid. Backman’s two-goal third period started by jumping off the bench 51 seconds in and scoring on a one-timer from the right circle. Vincent LoVerde had the primary assist there and fired a puck from the point through traffic onto Backman’s stick as he put the Reign up 5-1 and ended Poulin’s night. Then, at 6:55 Backman struck again, catching a Hail Mary-esque pass with his glove from Nic Dowd, just staying onside, putting the puck down to his stick and beating Kent Simpson all in one motion. The goals were Backman’s 13th and 14th this season.

Turning point
The Reign outplayed the Heat in the opening frame to the tune of a 15-8 SOG advantage but had little to show for it when they headed into the break in a 1-1 tie. With the Heat on the penalty kill, Shore stole a Kris Newbury pass and streaked up ice, beating Budaj on a high shot from the left circle with just 27 seconds left in the period. But out of the break Mersch got the Reign back on the right track and they never looked back. The left winger netted his 19th of the season on a breakaway after a heads-up pass from Kurtis MacDermid 26 seconds into the period to give the Reign a 2-1 lead. Mersch’s move to his backhand got Poulin to bite enough for him to roof the puck under the crossbar. The goal stood as the difference and was Mersch’s fifth game-winner of the season.

Stat fact
–2 – Massive hits by Scott Sabourin in the first period, ironically both on Heat forward Morgan Klimchuk. Sabourin, who was playing on the fourth line with Ryan Horvat and Paul Bissonnette, had been a healthy scratch the previous 16 games.

This and that off-ice
Adrian Kempe (illness) missed his first game of the season that wasn’t related to his World Junior Championship trip when he went on hiatus to play for Team Sweden.

Next up
The Reign host the Texas Stars at 7 p.m. on Friday night. Ontario is 3-0 against the Dallas Stars affiliate and won the last meeting 2-1 at home on Jan. 17.