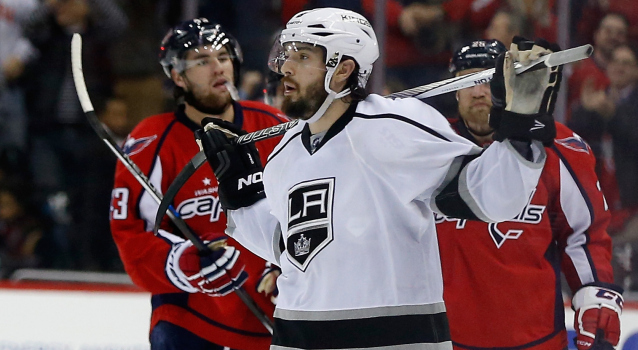 It was an unforgiving night for the Los Angeles Kings, who did a lot of things right on the road against the league’s top team but fell 3-1 after allowing big goals at the end of the second and third periods and will now look to rebound at the tail end of a long road trip with tough games remaining at St. Louis and Nashville. From a performance standpoint, Tuesday night’s game resembled one of the team’s standout efforts of the season and had a clear playoff-type feel, even if the shot totals were raised from what is usually expected in the spring. There were penalty issues in the first period – they included two L.A. offensive-zone penalties – that allowed the home team to generate some momentum on the man advantage in a match-up of the league’s top two power plays, but the Kings ably weathered the challenges and emerged with a shorthanded goal as Drew Doughty dove to disrupt a threatening Marcus Johansson – Alex Ovechkin mini two-on-one to send Dustin Brown and Anze Kopitar loose for a rush that resulted in the game’s first goal. It was a world class play involving world class players on all fronts, and while Doughty and Kopitar were the primary actors, credit Brown for controlling the puck and keeping it away from John Carlson when entering the offensive zone before finding Kopitar, who buried his own rebound from a sharp angle. If you’re looking for a grouping of Los Angeles’ best forwards in the game, Dustin Brown would be at or near the top of any list.

On the other hand, points aren’t awarded for standout efforts, but rather for outscoring the opponent, and an accomplished team like the Kings won’t pat themselves on the back for dropping a game in which they had opportunities to take a two-goal lead but often found the middle of Philipp Grubauer’s chest. The Capitals’ goalie was very sturdy in the win and deserving of the first star, but while Los Angeles out-chanced and heavily out-possessed Washington at even strength, weren’t able to find any grease that could’ve doubled their lead or provided a late dagger. The Kings are playing winning hockey, even if they’re not winning games at the same rate as earlier periods of the season. This will eventually correct itself over the long run, though with two teams closing in at the top of the Pacific Division, those types of futures aren’t exactly at the forefront of the team’s mind. It’s a small sample size, and there are fluctuations over the year in shooting percentage, but a cursory evaluation does stir up some concern that in the two games since Marian Gaborik’s injury, Los Angeles hasn’t scored an even strength goal. His eight five-on-five goals ranked fourth on the team. We’ve seen periods of thinned out scoring before with this club, but this year’s team scores at a greater rate than other recent Kings teams. Should the roster receive some tinkering in preparation of the playoffs, this combination of increased scoring and the continually outstanding possession metrics should foretell a team that will have the ability to play deep into the spring.

Of that tinkering: The Kings still need a shot in the arm of the back end, and will continue to look to potential trade partners to do so. Kevin Gravel’s first four NHL games have mostly been encouraging – he’s going to play in this league – but he’s averaging only 11:08 per game and was involved in Evgeny Kuznetsov’s game-winner last night. There is ample room for Brayden McNabb’s game to grow, but that’s not important when the Kings are trying to fend off several divisional rivals and there has been a dip in his performance over the past month or so. As for the game-winner last night, hey, that’s Evgeny Kuznetsov, a point-a-game player, and Justin Williams – you know Justin Williams – making a play as the aforementioned defensemen scrambled. I didn’t see goaltender interference on the play, mostly just incidental contact by Williams, followed by a reset of a new play as the puck ended up behind the net. Others could disagree, and I had heard there was a concern over a potential off-side play as the puck entered the zone, but I don’t recall that particular moment, and the available replay begins in-zone. It was a tough way for the game to end as the Kings were very good on Tuesday, but credit the Capitals for finding their legs early on in the third period and scoring a big goal late. The road trip continues; park and ride.