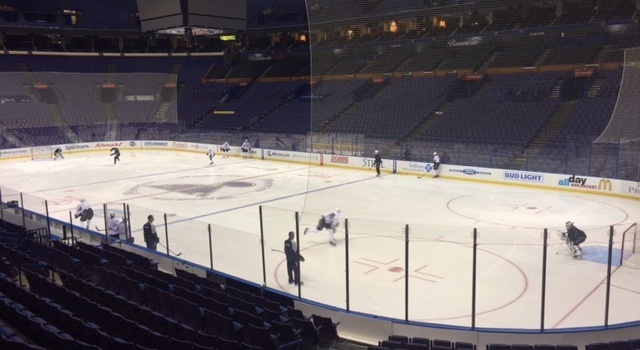 The Kings took the ice shortly before 2:00 p.m. local time at the Scottrade Center today, and unsurprisingly, not all players skated 10 days into a 13-day road trip and only 16 hours following the conclusion of the previous night’s game. Still, there was a pretty good turnout, and those who practiced did so under the command of John Stevens, Davis Payne and Bill Ranford. Those who didn’t skate worked out at the arena.

Of note: The Peter Budaj assignment back to Ontario was made official by the team. It’s also worth mentioning that the Twitter account purporting to be Budaj is not actually him. Pay that impostor no mind.

Darryl Sutter didn’t skate, though he did take part in meetings at the rink, and as players were leaving the ice, he met with the assembled media.

Darryl Sutter, on what he’s liked from Anze Kopitar’s line:
I like it on the road because you don’t get match-ups you like. They’ve got to produce. It doesn’t matter with those individuals how it works. Losing Gaborik creates a hole for our team. If you’ve looked at it since he’s been out, our scoring chances, you can say we’ve out-chanced the other teams, but one of those has got to go in. Other than that, our game, we should’ve won every game. Guys have got to score. Brown, King, Toffoli, Pearson – they’ve got to score. It’s not based on Kopitar. [Reporter: It’s interesting, because as you said, the team is playing winning hockey right now, but you’re trying to make a playoff spot right now, and you’re trying to fend off a couple teams that have closed the game. How do you balance that?] We’re not trying to fend anybody off. We’re trying to make the playoffs. [Reporter: So how do you balance that this team has played well but hasn’t consistently on this trip, at least, gotten two points?] Just what we talked about. You write about individuals getting better. It’s not that hard to figure out.

Sutter, on the team not immediately recalling a player from Ontario:
I don’t think that’s the right thing to do on a long trip because, quite honest, there are other things that go onto long trips that affect performance. What point would it serve to fly somebody, not knowing what you’re going to get when you’re playing well and just not getting the finish? We’ve played a lot of different types of teams and we played good doing it. [Reporter: You are getting the chances.] We’re getting lots. It’s not just that, you can’t give up opportunities. How many teams are going to score three goals a game this year? Five? Four? So you’ve got to make sure that’s in your foundation. Good teams, that’s what they do. Hey, last night, Washington, that’s the first time – not counting the empty net goal – so the scored ends up two-one. It’s a bad goal, the goal they scored to make it two-one. If you go back, the reason they have the best team in the league right now, [it’s] what they give up, what they score. They’re scoring three-to-four goals a game, but that three’s enough to win. [Reporter: It’s interesting, because they’re almost overlooked keeping the puck out of their own net, because possession-wise, they’re right in the middle. It’s not as if they’re playing exclusively in the offensive zone.] Special teams impact a big part of that. Special teams were a huge factor last night. If you look at Ovi, the shots he had, I think five were primary power play shots, and they were all good opportunities, and we talked about we did a really good job of trying to neutralize some of that with him, but he still got his shots, and the same thing with us. We were working on it this morning with guys. You know what? Good opportunities, you’ve got to score on one of ‘em.