Budaj back with Reign after stint with Kings 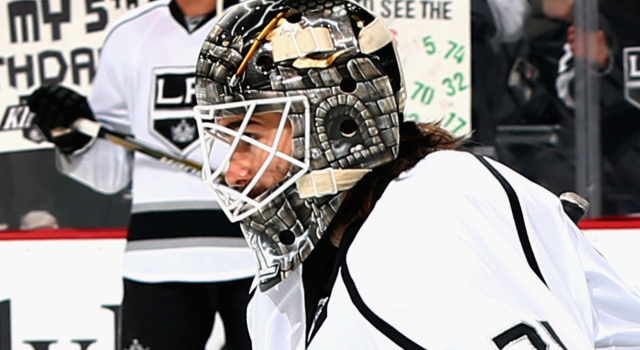 The Kings have returned goalie Peter Budaj to the Reign. The organization officially announced the move Wednesday afternoon and Budaj will start tonight against the Stockton Heat. No corresponding roster move with the Kings is expected, as LA Kings Insider Jon Rosen reported Wednesday morning.

Budaj, 33, was brought up by the Kings originally as an emergency call-up on Feb. 11 after Jonathan Quick suffered an injury two days prior in a win against Boston. But Quick, who was day-to-day, was well enough to play on Tuesday in a 3-1 loss to the Capitals. For that day, the Kings carried three goalies as Budaj assumed the roster spot of Marian Gaborik, who is on IR.

Budaj appeared in one game for the Kings, making 24 saves in a 5-4 overtime win against the Rangers last Friday. He’ll be a welcomed presence back in Ontario as he leads the AHL in goals against (1.58), save percentage (.935), wins (26) and shutouts (8). In his absence, the Reign have dropped three games in a row for just the second time all season. Michael Houser was the starter of all three, losses to San Jose Barracuda, Bakersfield Condors and Stockton Heat.

“[Budaj’s] put together quite a pretty good season thus far and he arguably could be certainly the MVP of our team if not maybe the league with the numbers he’s posted,” Stothers said Wednesday. “He’s a valuable member. He’s a good veteran guy. He’s a guy that ridden the wave of wins and three-game losses and knows how to continue to prepare himself and the rest of his teammates.”