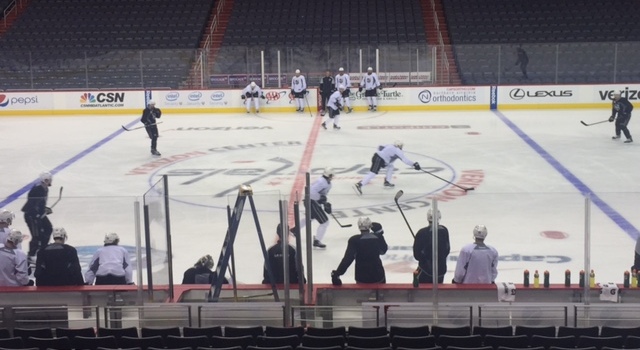 Good afternoon to you, Insiders. Let’s just get it done with: Jonathan Quick was the first goaltender to leave the ice at the morning skate and is expected to get the nod against the NHL-leading Washington Capitals after a three-game absence. This produced maybe the tightest and most hotly contested #LAKingsGoalieTweetOff in the history of the competition:

Patrick O’Neal was also right there with some itchy tweeting fingers. Good work, all.

-The Kings took line rushes at the start of the morning skate and aligned thusly:

-Jhonas Enroth and Peter Budaj remained on the ice for extra work with Jamie McBain and Andy Andreoff. Expect Enroth to back Quick up and Budaj, McBain and Andreoff to serve as tonight’s scratches.

–Philip Grubauer is expected to get the nod for Washington tonight, and Brooks Orpik will draw back into the lineup after a 40-game absence. Expect the Caps to show lines of Ovechkin-Backstrom-Oshie, Burakovsky-Kuznetsov-Williams, Chimera-Johansson-Wilson and Laich-Richards-Galiev, with pairings resembling Alzner-Carlson, Schmidt-Niskanen and Orpik-Orlov.

-I’ll share this interview during the first intermission tonight, but I spoke with Jake Muzzin about denying the pass to Alex Ovechkin on the power play and several other topics, and there are some interesting answers:

Drew Doughty, on why Justin Williams’ nickname is “Stick”:
I don’t even know who made that. You’ll probably have to ask Kopi on that one. It’s probably because he’s pretty skinny, that’s probably one of the reasons. He’s a good player, we need to play well against him tonight.

Doughty, on the type of leader Williams is:
He kind of waits for the right moment to speak up and when a guy like that says something, a guy that’s won three Stanley Cups and a Conn Smythe, everyone’s going to listen. He’s a smart man and he knows the right things to say at the right time. He was huge for our team, I will never forget he did a speech one time for our clinching game against the New Jersey Devils and I think it made a difference. [Reporter: When he said those right things, is that a motivation thing, is that a critique thing?] I would say it’s more motivational than anything. There are times when guys critique too, but he just says the right things at the right time. Things like ‘we’re a family’, ‘I want to remember us as winners together’ and things like that, and it worked.

Doughty, on Williams’ impact on a team that hasn’t won a championship:
A guy that’s been through it, he has all the scars and bruises to prove it. It’s tough to win a Stanley Cup, it’s so, so difficult and we were fortunate to win two. For guys like the Capitals, a lot of them on that team haven’t won, so they have to look up to the guys who have won and they have to pick their brain and learn from their experiences and Justin and Rick are guys that can speak up and show them the ropes for that.

Doughty, on Williams’ speech prior to Game 7 against New Jersey:
I don’t remember it any more. The one thing I remember is him saying ‘I want to remember each guy on this team as a winner and a Stanley Cup Champion and a brother that way. That’s basically what I remember. [Reporter: Was that the clinching game?] I think it was, I might have made that part up, but it was definitely that series.

Doughty, on Williams’ impact in his first full season after getting traded:
I think in that first year he was actually getting healthy scratched, which was weird, because he’s a Stanley Cup winner and a great player. He was battling those injuries, so we were never sure how he was going to pan out. Then he started staying healthy and started playing more and more and we saw the reason why he was a Stanley Cup champion and why he is such an effective player. He works his butt off, he’s a great teammate and we miss him, but we have to beat him tonight.

-I’ll join SiriusXM NHL hosts Scott Laughlin and Boomer Gordon on The Power play at 1:15 p.m. PT this afternoon, and will join Julian Coltre on Caps Talk at 2:15 p.m. PT. Caps Talk can be accessed here. Lots more to come today, Insiders, including the game preview, which should be up in under two hours. Enjoy your Tuesday, Insiders…