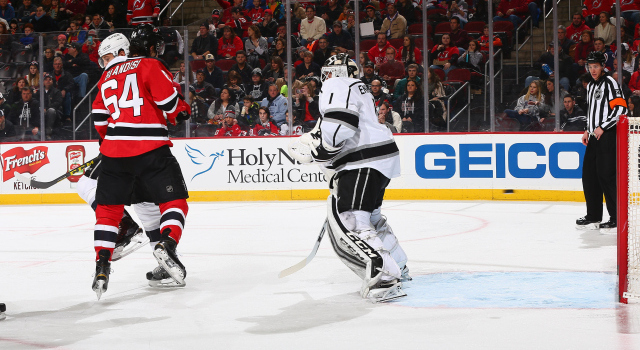 In a return to their Devlish ways, the New Jersey Devils disrupted zone exits, zone entries, net-front drives and high quality scoring opportunities and mucked up a perfectly good hockey game en route to a 1-0 win that tightened the races in both the Pacific and Metropolitan Divisions. The Kings didn’t play poorly – there was purpose and effort from the get-go that was accentuated in the third period – but they did struggle to create offense against a stingy team that entered the day with the fewest goals against in the National Hockey League, and it was easy to see why. Rush chances were channeled towards the perimeter, sticks were in passing and shooting lanes, and until the third period, goaltender Keith Kincaid hadn’t seen a ton of dangerous rubber coming his way. Los Angeles dominated the final 20 minutes, but attempts by Kyle Clifford, Trevor Lewis and Jake Muzzin all finished as near misses. Los Angeles could’ve benefited from an additional power play – a low hit from Bobby Farnham on Anze Kopitar should’ve been assessed a clipping minor in the second period – but Seth Helgeson’s trip on Jordan Nolan was borderline at best, and credit New Jersey for playing a tight, structured and opportunistic game as they picked up at least one point for the 10th time in their last 12 outings to jump back into the Metro’s playoff picture.

Speaking of opportunism, the Devils took all of four seconds to convert a power play that probably shouldn’t have been awarded in the first place. I saw no replay of the first period infraction – our screens were out in our broadcast booth – but Vincent Lecavalier got tangled up with Reid Boucher in the Kings’ defensive zone, and in the collision, Lecavalier’s stick inadvertently ended up between Boucher’s legs, and Boucher appeared to fall from the awkward contact, not from the trip. That the call was a hooking minor was even more perplexing. But if there’s anything that Darryl Sutter dislikes more than iffy calls, it’s goals off faceoffs, and immediately after the stoppage, Travis Zajac beat Kopitar off the draw. David Schlemko picked up the loose puck, drifted to his left, and beat Jhonas Enroth, who had to contend with a deflection and three bodies directly in his line of sight. Though Enroth wasn’t at his best on Thursday – he didn’t make a big save against the Islanders, but he didn’t let in any soft goals, either – he was much better against the Devils in a 17-of-18 performance, and in his 10 starts, has been backed by 1.8 goals per game. In the TV timeout that ultimately followed the goal, Lecavalier had an extended conversation with referee TJ Luxmore in Los Angeles’ end. 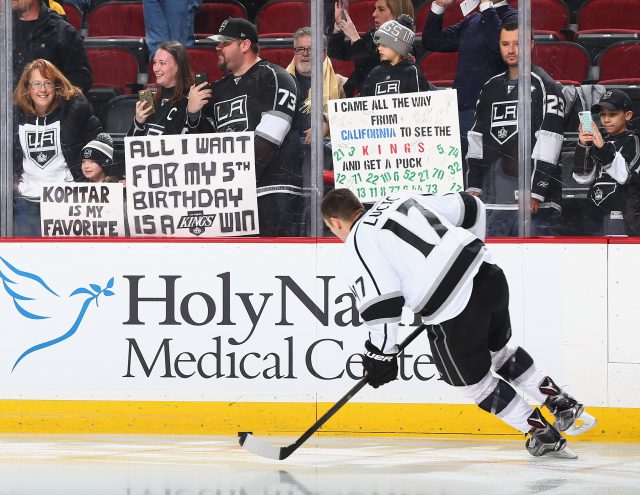