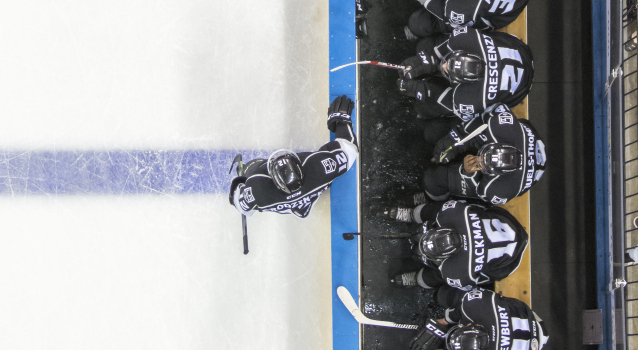 –The Reign are in the midst of the three-game losing streak for just the second time this season. They also hit a rough patch in late December/early January but it should be noted that in 45 games, losing three games in a row just twice is a testament to the team’s ability to bounce back. The Reign are 28-13-3-1 and still tops in the AHL’s Pacific Division with a winning percentage of .677. In this recent skid, they have four goals on 127 shots and have outshot their opponent in each contest. They’ll have a chance to right the ship on Wednesday when they host Stockton at 7 p.m. “The only thing you can do is remain positive and keep pushing forward,” head coach Mike Stothers told me via text after Saturday’s loss.

–Nic Dowd escaped injury in the first period against Stockton, taking a check from behind from the Heat’s Garnet Hathaway, a hit that forced him to exit the game with just under six minutes left in the period. Dowd, one of four Reign members to play in all 45 games, underwent concussion protocol but returned in the second period. Stothers expressed his frustration with that play and the overall officiating of the game afterwards. The coach said via text: “There was no penalty on the play as it was deemed he turned into it??” Take a look and draft your own opinion (video courtesy of Sheng Peng of SB Nation’s Jewels From The Crown):

–Adrian Kempe has gone scoreless the last 15 games, his last goal coming in his first game back from World Juniors on Jan. 8 vs Stockton. He had a game-high six shots on goal in Saturday’s loss and has been skating with veterans Kris Newbury and Sean Backman.

–Goalie Michael Houser was thrown into the fray after Peter Budaj’s emergency recall to the Kings last week. The 6-foot-2 netminder had played in just one game out of a possible 25 after joining the team in early December. Now, he’s played three in a row, all losses in which the Reign have given up the first goal of the game.

–Kevin Gravel remains with the parent club and has now played in three NHL games after making his debut last Thursday against the Islanders. The 6-foot-4 blue liner out of St. Cloud State, has played mostly with Luke Schenn and Alec Martinez. Jim Fox of FOX Sports West said Gravel reminds him of Martinez when Martinez was a rookie. “I don’t think Gravel’s as explosive as Alec, but I think he gets around the ice at NHL speed, so he can play an NHL tempo,” Fox said during Saturday’s Kings-Devils broadcast. “That is a given right now. So now you work on reads, you work on situations. As you get more experience you learn to figure out what’s going with the other team, other player’s tendencies, those type of things of things, but his tempo is there.” During the three games his time on ice has increased ever so slightly game to game (10:46, 11:28, 11:52). Gravel lives with Mersch, who also had a call-up to the Kings this season. Perhaps the best quote of the weekend was Mersch describing what happened last Wednesday, the day the news broke that Gravel would be called up. “I was pumped,” Mersch said. “Me and him were sitting having breakfast in, where were we, San Jose and we were having a coffee and some oatmeal from Starbucks trying to save a few bucks, a few dollars of per diem. Now he’s going up and making the big money so that’s funny.”

–Valentin Zykov returned to the lineup in Friday’s loss to Bakersfield after being scratched for three straight games. Stothers has in the past stressed the attention to details in the Russian’s game and on Saturday talked about him building trust with the coaching staff. “I liked Z’s game,” Stothers said. “He’s back in after sitting out but he actually did what I was looking for him to do. There was a play late in the second period where he got the puck out of the zone. It was a matter of you get it, if you can make a play, you make a play, if not, chip it out and make sure it gets out. And some of those things have been kind of hurting him in the fact that there’s that trust factor. Can we put him out in certain situations or in certain time periods of a period? It’s a process for him to learn and I was very happy with him and very proud of him … take what we’re offering you, apply it, make yourself a better player, a reliable player. So, that was good.” With Zykov’s return to the lineup, he replaced Justin Auger on the third line, skating with Andrew Crescenzi and Jordan Samuels-Thomas. As a result, Auger was up on the first line with Nic Dowd and Michael Mersch.

–Christian Ehrhoff has now played in two games with the Reign after being placed on and clearing waivers last week. He came out with quite a bit of ice on his body after Friday’s loss and commented on needing to used to playing high minutes alongside Derek Forbort. He was asked if there was a message from the Kings and Dean Lombardi and said there was, but that it was not for him to share. Ehrhoff registered and assist in his first game and his offensive skill was on display in Game 2 on Saturday:

I made joke earlier in yr that McBain at AHL level looked like prime Ozolinsh, check out Ehrhoff pic.twitter.com/QZfXdifd3m